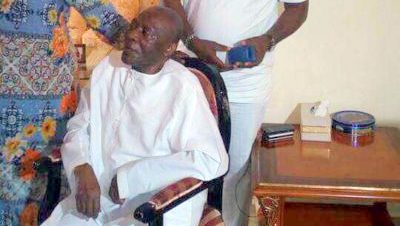 The photograph of ageing and possibly sick Arthur Nzeribe, sitting languidly, with medics around him has gone viral in the social media.

It was not clear who broke into Mr. Nzeribe’s private home in Orlu, Imo State, to take the photograph of the former arms dealer, maverick politician and a man believed to have been used by the Ibrahim Babangida military regime to scupper the 1993 presidential election.

The photograph is now being shared on many WhatsApp platforms, with commentaries short on sympathy, but replete with lessons on the vanity of life and the enfeebling capacity of old age.

Mr. Nzeribe, 78, had vanished from the limelight since he was defeated in the 2006 primaries of the Peoples Democratic Party to elect a senatorial candidate for his Orlu Imo State constituency.

Obviously struck down by illness and enfeebled by it, he has not been a factor in the Nigerian politics for close to a decade. His voice had been in silent mode since then.

The man who once ran for office as president and was elected a senator in the short-lived Babangida military-Civilian rule experiment and in 1999 and 2003, re-emerged in the last 24 hours in dispiriting, shocking circumstances.

One comment largely shared along with the photograph says: Above is Author Nzeribe living like an invalid at his country home in Orlu, IMO State. At the height of his life, he lived in Nicon Hilton Hotel Abuja Presidential Suite for over 20years. So also Federal Palace Hotel, Lagos. He rode on Rolls Royce cars in London and Lagos. Had Mansions in major cities of the world. Had private jets. Was one time an enfante terrible of Nigeria’s Politics. He helped to lead IBB to June 12 imbroglio and Late Abacha’s attempted transmutation to Civilian President in 1998.

“Today, he lives a pathetic life at the mercy of aides and Nurses. Life is moving on in Nigeria and the world without him. Money, cars, houses, private jets, and jet life are all Vanities upon Vanity. May God Almighty continue to bless us with Good and sound health, peace of mind and contentment today and forever, Amen”.

But another commentator chipped in:

“Francis Arthur Nzeribe’s body physique today is the natural consequence of ageing, which all of us, if God blesses us with old age, will have to pass through. It has nothing to do with his infamous role as ABN leader. This is also a lesson to all, that in our journey through life, we should remember that there is God almighty and that one day, we will give account of our stewardship. “.

Another Nigerian wrote: Let those who have ears to hear, eyes to see learn from Arthur Nzeribe’s case. Vanities upon vanity all will end one day. Who inherited all of ‘Emperor Haile Selassie of Ethiopia properties?

But it appears the commentaries may have gotten things wrong on the state of health of the old politician. According to a statement by Collins Ughaala, who identified himself as Mr. Nzeribe’s chief press secretary, Mr. Nzeribe is hale and hearty and not struck by stroke as being suggested in some quarters.

“The attention of Chief Senator Francis Arthur Nzeribe has been drawn to the hateful speeches going on against him in the media, especially the social media, including the unfounded runour that he has a stroke.

“Chief Nzeribe should have ignored this hateful rumour, but “to set the record straight”, this brief response is offered to the effect that “the rumour is false as I don’t have a stroke.”

“At 79 years old, I am hale and hearty and not suffering from a stroke. I am not in my community, Oguta, in Imo State. I am resting in my house in Abuja. And I thank God for keeping me healthy and allowing me see old age.

“Life and death are in God’s hands, and God willing I will remain hale and hearty and not suffer a stroke until such a time when God calls me home. And no amount of hateful speech can change or alter God’s plans for me or anyone else.

“I am not suffering from stroke and I cannot wish anyone to suffer stroke. But to those manufacturing and spreading this hateful speech against me, I wish them the best.

“God has deemed it fit for me to see old age in good health, and there is nothing more to ask from God.”