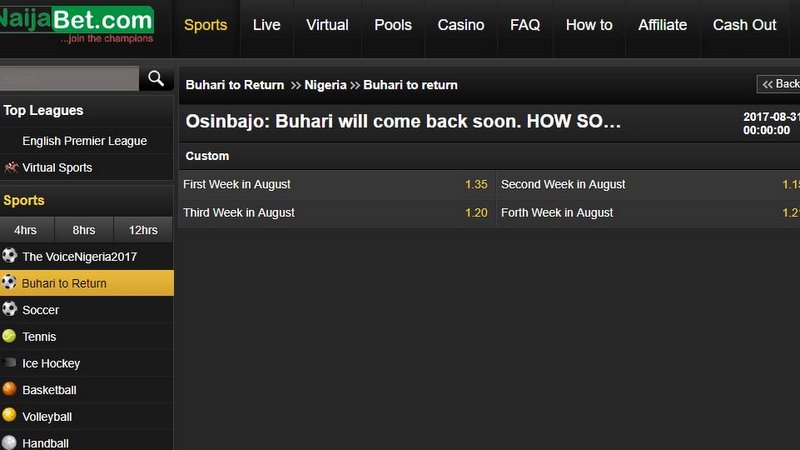 A popular sports gaming site, NaijaBet.com, has asked Nigerians to stake their money on when President Muhammadu Buhari will return to the country.

President Buhari has spent 87 days in London as at Thursday on a medical vacation over an undisclosed ailment.

The trip, described as a “follow-up”, started two months after Mr. Buhari returned to Nigeria from an earlier trip to London.

Like the previous occasion, his office has not provided a definitive time frame for which the president will be away, saying instead that the length of stay will be determined by his London doctors.

This has led to widespread speculation that the President is critically ill and on life support, a claim the presidency has denied.

Some APC governors and chieftains who recently visited President Buhari at the Abuja House in London all said he is doing well and described his return as imminent.

Mr. Osinbajo, after the visit, said the president was recuperating fast and would return soon.

The stake placed on Buhari’s return by the betting company is coming a few days after a United States television medium, Cable News Network, CNN, also displayed a question that seems to be directed to the president’s continued stay abroad.