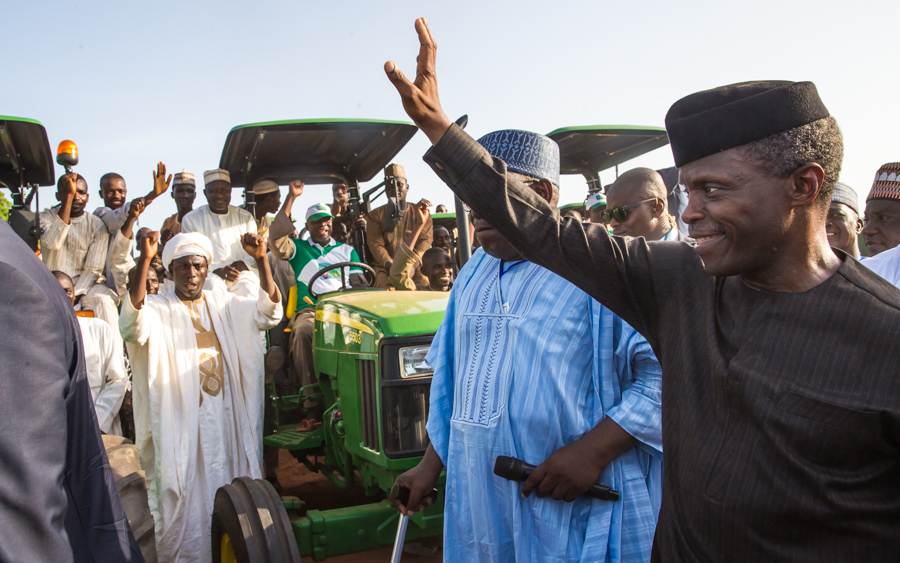 Welfare of Nigerians is at the core of our policies – Osinbajo

The Acting President, Yemi Osinbajo, has assured Nigerians that the All Progressives Congress, APC-led federal government will deliver on its promises to Nigerians despite numerous challenges facing the economy and the country.

Speaking Tuesday in Birnin Kebbi, Kebbi State, at the conclusion of a parley between the federal government and governors elected under the platform of the party, Mr. Osinbajo urged state governors elected to make extra efforts to deliver on the promises made to Nigerians in 2015.

According to the acting president, “the ideological difference that we represent is that we are committed to an economic policy that has at its core the welfare and happiness of Nigerians.”

“The people have not lost faith in us, they understand that the task of clearing decades of debris will take time but we must also jointly keep faith with them.

“The people expect us to deliver on all of what we have promised. They expect a better life, we have assured them of a better life, and I can say for all of us who are present here, all of us in the progressive forum, that we will deliver a better life to the people of Nigeria,” he said.

The acting president emphasized the need for a stronger collaboration between the federal and state governments noting that “ultimately, the success of efforts to bring about synergy in Federal and State Government policies would depend on both sides meeting their commitments.’’

According to him, “just as the FG is committed and has taken visible steps in meeting its obligations and make refunds on debts owed to states, it’s imperative for states to play its own parts. There are two obvious elements here.’’

Mr. Osinbajo further explained that “when the Federal Government provides relief resources, the resources are used for the agreed purposes. The second is to implement agreements that have been reached in specific sectoral contexts. For instance, states must continue to work toward implementing their parts of the fiscal sustainability plan in order to improve their individual fiscal situations which impacts on the national fiscal picture.’’

The Acting President then identified key areas of collaboration between the federal and state governments as including “scaling up Internally Generated Revenue and innovative thinking,’’ emphasizing that “states especially those led by APC governors must think out of the box in delivering service to the people including in areas where their efforts can complement the Federal Government programmes.”

Mr. Osinbajo thereafter proceeded to Argungu where he commissioned the multi-billion rice mill stating that “the way to go is to energize agriculture and lift Nigerians to new levels of productivity.’’

He said: “the commissioning of the rice mill in Argungu is proof of growth in agriculture with thousands of job creation, noting that “the growth and development witnessed in the agricultural sector differ from the jobless growth of the past.’’

The acting president also attended an exhibition of agricultural products and farm inputs in Argungu before returning to Abuja.

Mr Osinbajo has been making spirited moves across the regions to reignite the hopes of Nigerians in the midst of numerous socio-economic and political upheavals.