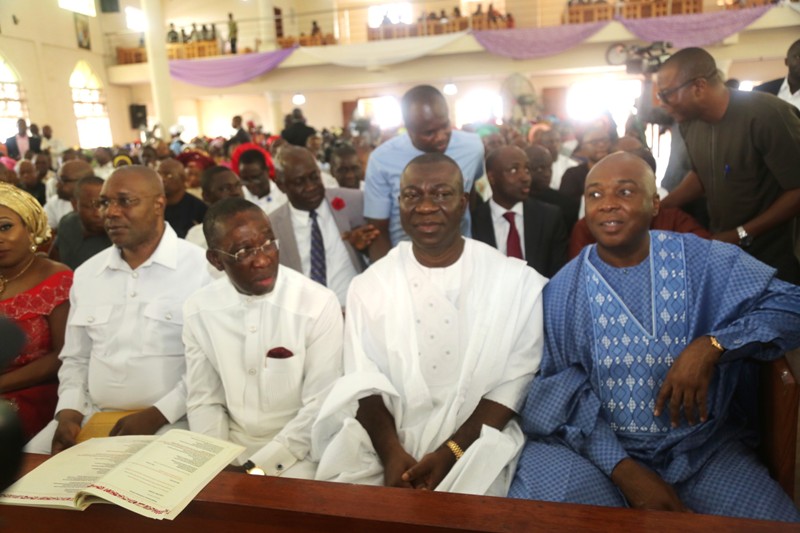 Speaking at the 60th birthday thanksgiving mass of the senator representing Delta North, Peter Nwaoboshi, at St Augustine’s Catholic Church, Ibusa, they stated that Nigerians should put the interest of the country first before self.

The Minority Leader of the House of Representatives, Leo Ogor, was also at the service which was attended by the Minister of State for Petroleum, Ibe Kachikwu, and his Niger Delta counterpart, Uguru Usani.

An array of traditional rulers, priests and politicians attended the event.

Mr. Saraki said, “I want to assure the clergy that we will continue to seek for your prayers for this great country of ours; the challenges facing the country are enormous, it goes beyond roads and infrastructure. The peace and unity of this country is paramount and should be upheld but, equity and Justice where every Nigerian has a say must be the watchword.”

The senate president who congratulated Mr. Nwaoboshi stated that the Senate is one family and would ensure that Nigerians get their dues.

To Governor Okowa, “the church should continue to pray for politicians for they work under very serious circumstances; we will continue to encourage ourselves to be good representatives of our people; we need the partnership of all Nigerians and Deltans to develop our communities and we will continue to support the Senate in its defence of democracy.”

The governor, who paid glowing tribute to Mr. Nwaoboshi, asserted, “people of Delta North supports him and as Delta Northerners, we are very proud of him as Senator representing us.”

The former governor, James Ibori, in his speech, observed, “in a democratic dispensation, you have assigned duties – it is the duty of the legislature to make laws, the executive to implement the laws and the civil society elders and clergy will tell the truth to those in power.”

“I am yet to see an elected officer that does not have the interest of the people at heart,” the former Governor reiterated, disclosing that Senator Peter Nwaoboshi is a committed son of Anioma (Delta North) who fought for the emergence of a Delta Northerner as Governor.

An elated Mr. Nwaoboshi, at the occasion, said he had every reason to thank God on his 60th birthday, noting that selfish, ethnic interests are put aside in the interest of the nation.

“We have more APC (All Progressive Congress) senators here than PDP (Peoples Democratic Party) senators in this church, and it tells you that we think of Nigeria rather than self, party or ethnic interests because, the senate president has made it for us to think and work for only Nigeria,” he said.

A cleric, John Aduba, had in a sermon urged political office holders to be the voice of the voiceless, observing, “there is a lot of sufferings and smiling, people are being denied the basic things of life, no road, no water, no electricity; you might be comfortable but, those who elected you to serve, how do they feel?”

The priest urged Christians not to only receive the words of God but should treasure the words into practice.

NAN warns bloggers, others against illegal use of its news