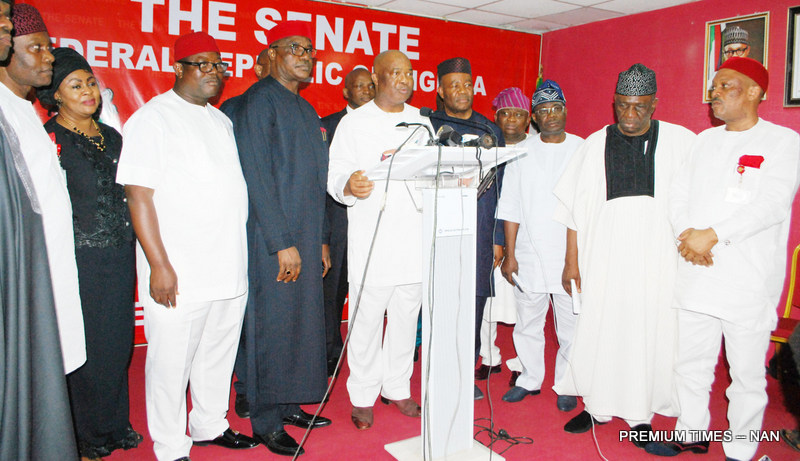 Chairman of the newly formed Southern Senators Forum, Sen. Hope Uzodima (M), addressing newsmen after the Forum’s Maiden Meeting at the National Assembly in Abuja on Wednesday (5/7/17). With him is the Senate Minority Leader, Sen. Godswill Akpabio (4th, R) and other Forum Executives. 03355/5/7/2017/Hogan Bassey/EO/BJO/NAN

The Southern Senators Forum on Wednesday re-emerged at the Senate after being in oblivion for some years.

The News Agency of Nigeria recalls that the forum’s activity was last noticed 2006 and 2007 during the tenure of Ken Nnamani as President of the Senate. It had Ifeanyi Ararume as chairman.

Announcing the revival of the forum after its meeting at the National Assembly Complex, Abuja, Senate Minority Leader, Godswill Akpabio, said that it was inevitable that the group existed.

He said that as lawmakers, they must get closer to the grassroots in order to provide them with the basic needs of life.

“We must ensure that we take decisions that will enable us get closer to our people as we provide a shoulder they can lean on.

“We are alive to our responsibilities. It is not just to pass bills. We will take on topical issues that will alleviate the sufferings of Nigerians like security and creation of employment.

“We will make Nigeria one,” Mr. Akpabio said.

Mr. Akpabio announced that Hope Uzodinma (PDP-Imo) was Chairman of the forum, with Lanre Tejuosho as Vice Chairman.

Other members in the executive committee of the group are Mao Ohuabunwa (PDP-Abia), Publicity Secretary, while Duro Fasheyi is the Auditor.

The only female member of the committee, Stella Oduah (PDP-Anambra), is the Welfare Officer.

In his remarks, chairman of the group, Mr. Uzodinma, said that the Southern Senators caucus would play vital role in strengthening the unity of Nigeria “going by the recent agitation by various sectional groups across the country.”