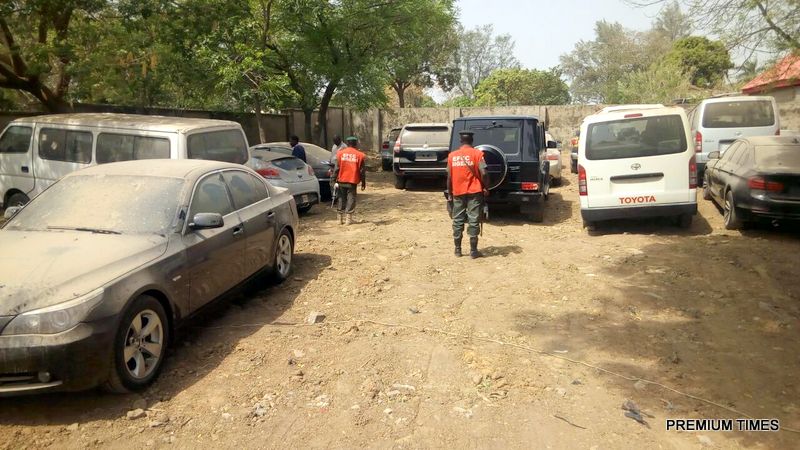 FILE PHOTO: Some of the cars recovered by the EFCC warehoused by the ex-Customs Boss

Justice S. M. Shuaibu of the Federal High Court in Kaduna on July 4 dismissed an application by Abdullahi Inde, former Comptroller General of the Nigeria Customs Service, urging the court to vacate its earlier interim order of forfeiture in favour of the Economic and Financial Crimes Commission, EFCC.

It would be recalled that the EFCC had on February 22 recovered 17 exotic vehicles in a warehouse of the former Comptroller-General of Customs located at Nnamdi Azikwe Street, Kaduna.

The recovery was sequel to an intelligence report the commission received that stolen money and property suspected to be proceeds of crime were being warehoused at the former custom boss’ premises.

Following the recovery, the EFCC on February 24, 2017 secured an interim forfeiture order of the court against the properties.

However, Mr. Inde’s counsel, Mahmud Magaji, through a motion on notice urged the court to discharge the said order of interim forfeiture against his client’s properties.

But in a considered ruling on Tuesday, the court dismissed the application and held that “the EFCC has the power to obtain an order of interim forfeiture in respect of properties suspected to be proceeds of crime”.

The ruling was in respect of consolidated applications filed by the EFCC.

Magu: Osinbajo is on his own, Attorney General Malami says