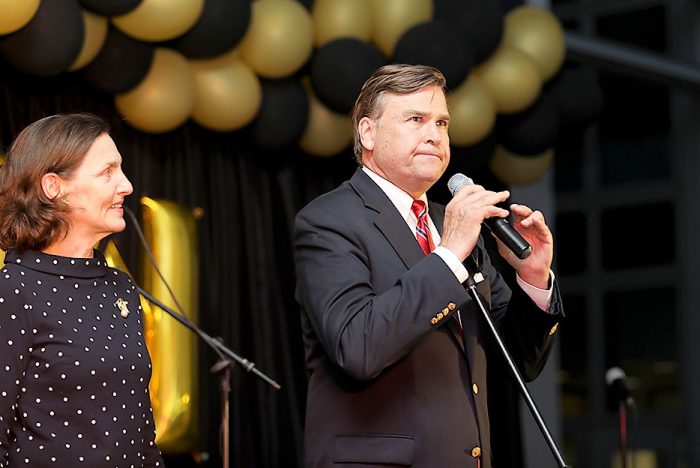 The United States Ambassador in Nigeria, Stuart Symington, said on Thursday that Nigeria possessed the capacity to face and overcome challenges in its drive to attain nationhood.

Mr. Symington was speaking in Abuja at a cocktail party hosted to celebrate the 241st anniversary of the independence of the United States of America in Abuja.

Citing some of the difficulties the United States faced in her political history to preserve its union, the ambassador said Nigeria’s current challenges were similar to the U.S., pointing out that its strength as a nation was in its diversity.

Attributing the U.S.’ success in overcoming its challenges to the resilience of visionary leaders and citizens committed to ensuring justice for all, he said Nigeria possessed similar qualities to see the country through its challenges.

“Today, Nigeria is fortunate to have such leaders and citizens. Together they are dedicated to keeping Nigeria United and just, and to ensure every Nigerian is heard and taken into account and treated fairly,” Mr. Symington said.

The envoy said United States and Nigeria shared close commonality, in terms of an “incredible diversity” in their politics and culture, adding that throughout the history of the U.S., the diversity the country prized and shared with Nigerians had been a source of tension, and sometimes, a challenge to its union.

Just like the United States, he said Nigeria was a wonderfully diverse nation, whose differences and diversity were sources of strength and reason for pride.

“Whenever I meet a Nigerian, I ask, ‘What do you like the most about your country?’ The invariable reply, from more than a thousand Nigerians, is, ‘I like the Nigerian people.’ I like our diversity, our resilience, our energy, our warmth, our spirit, our food…,” Mr. Symington told his guests.

Since his arrival in Nigeria, he said he has had the opportunity to confirm how much Americans shared with Nigerians, saying both have shared families’ friends, interests and principles.

“We share families, friends, interests, and principles. All across this land, from Birnin Kebbi to Calabar, from Maiduguri to Badagry, Nigerians have welcomed me warmly and showed me the wonders of this country and its people.

“In almost every place, I have also met Americans whose lives are dedicated to their work with and for Nigerians,” the Ambassador said.

“Private sector employees and public servants alike, they work here in business and IT, agriculture and energy, health and education and civil society and justice, and they work to conserve Nigeria’s iconic natural beauty and stunning biodiversity.”

Recalling the warning by George Washington, one of America’s founding fathers, Mr. Symington said he had spoken of those who sought to weaken and defeat the country and would first attack the unity of government, while Abraham Lincoln made the preservation of the union his life’s work.

He said the most important thing today has been the relationship of the two countries’ governments, saying the last presidential elections in Nigeria sent a profound message around the world and Africa that nations were better when they were directed by the decisions of their citizens.

“It was the election that showed Nigeria’s direction to work on health and job creation. All what this is telling us in America is that we will not have a better partnership in the world than the people of Nigeria,” he said.