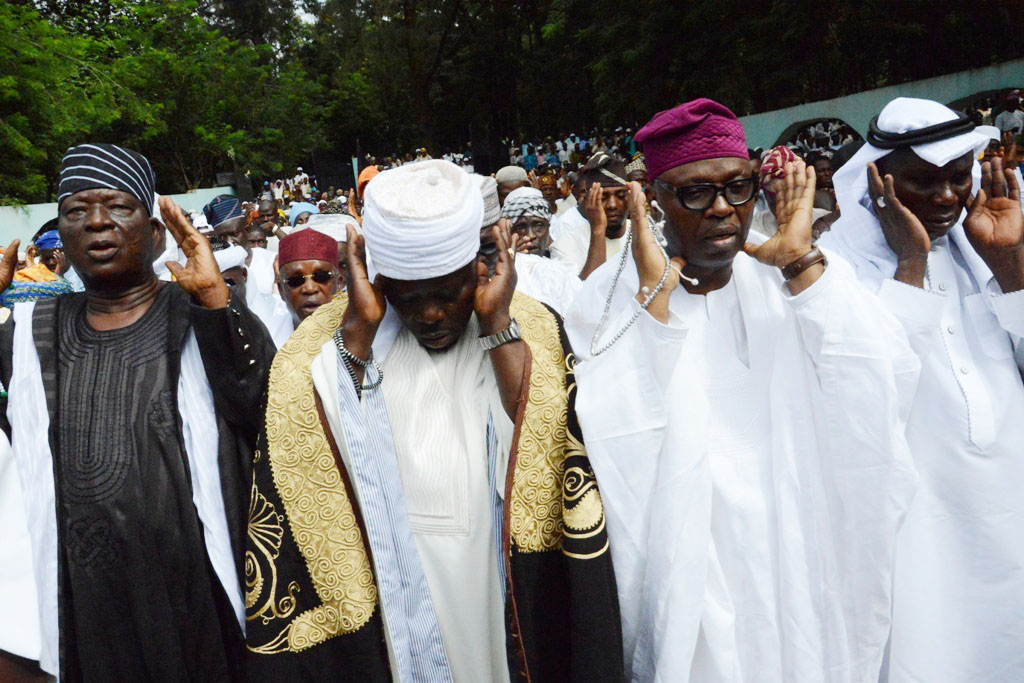 Governor Godwin Obaseki of Edo State on Sunday urged all Nigerians to continue to live in peace with one another irrespective of their religious or ethnic affiliations.

Mr. Obaseki made the call on Sunday when he received some Muslims in the state who paid him a Sallah visit at the Government House in Benin.

The governor particularly advised adherents of the Islamic faith to practice the lessons of Ramadan for peace to continue to reign in the country.

Mr. Obaseki, who was represented by his deputy, Philip Shaibu, said for a country to remain united, Nigerians, regardless of their religious leanings should protect the interest of their neighbours.

According to him, this is enshrined in the Holy Qur’an and the Bible which promote love for one another.

He called on Muslims in the country to adopt the Edo style of religious tolerance, where all citizens, irrespective of their religious beliefs, celebrate every festival as one people.

He also urged them to pray for those beating the drums of disunity to have a change of mind.

He said the calls for the break-up of the country could only lead to war which would not be in Nigeria’s interest.

Earlier, the Chief Imam of Edo, Abdulfatah Enabulele, had called on Nigerians to be their brothers’ keeper by embracing things that would further unite citizens.

The Chief Imam prayed for the quick recovery of President Muhammadu Buhari, and for the Acting President, Yemi Osinbajo, to have more wisdom to move the country forward.

In Oyo, Governor Abiola Ajimobi called for sustained prayer for Nigeria’s unity even as Muslims join their counterparts across the world to celebrate Eid-el-Fitr.

Speaking at the Eid prayer ground in Ibadan to mark the end of Ramadan, Mr. Ajimobi, urged the people of the state to live peacefully with one another and ensure the country remained united.

Mr. Ajimobi, who was represented by Ishmael Alli, the Secretary to the State Government, said: “The symbol is specifically obedience and total supplications to Allah. Specifically, we must thank Him for all we are enjoying in the country.”

“We must all live in harmony in this country. We must remain a united Nigeria, likewise pray that Allah grant us abundance.”

He further urged all Nigerians to contribute immensely to the development of the country and prayed for the speedy recovery of President Muhammadu Buhari.

In his sermon, AbdulGaniyu Abubakri, the Chief Imam of Ibadanland, called on Muslims to learn from the lessons of Ramadan.

“We had in the last 29 days been closer to Almighty Allah in total obedience and supplications.

“As we have ended the Ramadan fasting, our people must continue with the good deeds.

“They should reflect on the lessons of the period and uphold its teachings,” he said.

Hazeem Gbolarumi, a former deputy governor in the state, urged Muslims to adhere strictly to the teachings of Ramadan.

He urged Muslims to remain steadfast in prayer and to submit totally to the will of Allah.

Also, Muhammad Magaji, the Aguma of Gwagwalada, Abuja, called on Nigerians to embrace peace and to show support to the federal government.

Mr. Magaji made the call at the end of the Edi-el-Fitr prayer on Sunday in Gwagwalada.

According to him, there is need to live in unity and harmony in order to move the nation and the economy forward.

“I want to emphasise the need for peaceful co-existence because it is the tool for achieving unity and progress as no nation can make progress without unity.

“I want us all to embrace and support the agenda of this government so that we can all benefit from it,” he said.

He urged adherents of the Islamic faith to practice the teachings of Ramadan, which he said underscored the virtues of tolerance, patience, kindness and peaceful co-existence with non-Muslims.

He also called on parents to educate their children in both Western and religious education, saying “Charity begins at home’’.

Earlier in his sermon, Muhammad Zaria, the Acting Chief Imam Gwagwalada Central Mosque, had called for unity among Nigerians as it would encourage growth and development of the country.

On his part, the Deputy Imam, Abuja National Mosque, Muhammad-Kabir Adam, urged unity among Nigerians irrespective of their religious, ethnic and cultural differences.

Mr. Adam was speaking during the Eid-el-Kabir sermon at the National Eid Ground on Sunday in Abuja.

“We should know that it was not a coincidence that Allah created people with different backgrounds – religion, ethnicity, culture or any other differences that exist among the humanity.

“But it is for them to live together in unity and benefit from each other and not to disintegrate.

“Every citizen must respect the law of the land and shun all evil and wrong-doing,’’ he said

He called on Federal Government and all stakeholders to provide an environment conducive for the youth to engage in productive ventures to stop them from being used as destructive tools.

Some Muslims, who spoke with the News Agency of Nigeria, urged Nigerians to pray for the recovery of President Buhari and the accelerated recovery of the country’s economy.

Jibiri Musa applauded the federal government for its efforts at restoring peace in the country, particularly in the north-east.

Mr. Musa said even in the face of daunting challenges, Nigerians were still standing together to ensure that peace was restored in the country.

He, therefore, called on all Nigerians to live in harmony with one another irrespective of their differences to see that “our great country is not divided’’.

Another resident of Abuja, Latifat Salisu, stated that Eid-el-Fitr festival is significant because it represents a celebration of the true love and grace of Allah to mankind through sacrifice, devotion and faith.

She, therefore, called on all Nigerians to remain steadfast and committed to the cause of uniting and developing the country through show of love to others.

“This period is for sacrifice and obedience to divine guidance and a time to share our resources with our neighbours both Muslims and non-Muslims and also to remember the less privileged’’.

Why I still iron my wife’s clothes – Pastor Adeboye