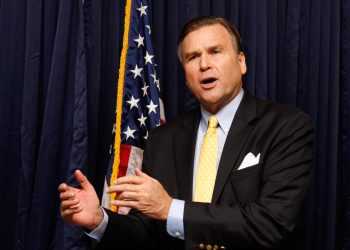 The U.S. Diplomatic Mission to Nigeria has awarded a N2.9 million micro grant to support children orphaned by HIV/AIDS in some part of Lagos state.

According to a Channels Television news report, the announcement was made on Friday.

The Mission gave the grant to 50 women caregivers to support the economic wellbeing of families, especially vulnerable children orphaned by HIV/AIDS, in five local communities in Apapa Local Government Area of Lagos.

Under the U.S. Ambassador’s PEPFAR Small Grants Program, a local non-governmental organisation, Blissful Life for Women and Children, will train the beneficiaries in business and vocational skills and trade mentorship, and will receive trade articles and supplies.

Ten older orphans and vulnerable children whose parents are living with HIV will also benefit from the training.

Funded by the U.S. President’s Emergency Plan for AIDS Relief (PEPFAR), the PEPFAR Small Grants programme is for community-initiated projects which aim to strengthen health services in communities affected by HIV and AIDS.

The programme supports projects that support and protect vulnerable children (OVC) and adolescents, and community-based HIV and AIDS care initiatives.

At an event held in Lagos attended by senior local government officials, health, and community leaders, Acting U.S. Consul General, Will Steuer, said: “The people and government of the United States continue to stand shoulder to shoulder with Nigeria and Nigerian families in the fight against the HIV/AIDS epidemic.

“Today’s event highlights the importance of supporting families, especially children who are affected by HIV/AIDS through programmes that not only support treatment for the infected, but also to improve the socio-economic wellbeing of families affected by the HIV/AIDS epidemic, as the PEPFAR Small Grants Program seeks to do.”

Beneficiaries of the various training programmes are expected to empower themselves and their families by building small businesses that will create more reliable income flows and improve their standard of living.

The U.S.-Nigeria partnership on HIV/AIDS began in 2004 through PEPFAR.

From 2004 to 2016, United States support for HIV prevention, care, treatment, and support programmes in Nigeria has totaled more than 4.3 billion U.S. dollars.

Why we intervened in Etisalat debt crisis — CBN, NCC