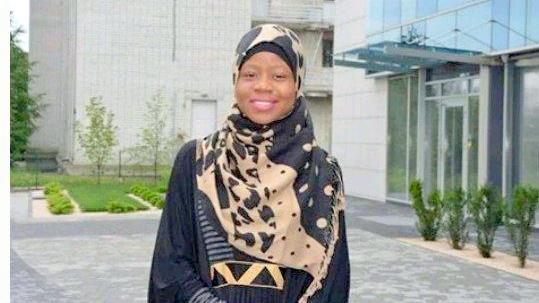 One of the 87 students sponsored by the Osun state government to study Medicine at the National University of Kharkiv, Ukraine, Oyeleye Lateefah Abiola, has emerged the best overall in her class for 2017 topping the class with a percentage score of 95.6%.

Miss Abiola, with Matriculation Number 258184358, is set to graduate on June 30, 2017 after the completion of her studies in a graduating class that has a total of 564 students.

A statement from the Bureau of Communication and Strategy in the Office of the Governor, signed by its Director, Semiu Okanlawon, explained that the Deputy Governor of the state, Grace Titi Laoye-Tomori, is expected to lead a delegation from the state to attend the graduation ceremony at the end of the month.

Mr. Okanlawon further explained that Miss Abiola was among other 98 students who secured admission to study Medicine at the state-owned Osun State University, had their study dreams terminated after the National Universities Commission (NUC) scrapped their course owing to the non-availability of a teaching hospital.

“This was a source of concern to the Governor, Ogbeni Rauf Aregbesola. This unfortunate development compelled the governor to seek for options to rescue the students from abrupt truncation of their dreams to become medical doctors,” he said.

“In the course of looking for solutions, the National University of Kharkiv, Ukraine came into focus. By 2012, arrangements were concluded to send the students to Ukraine where they resumed their studies,” Mr. Okanlawon stated.

The statement recalled that 98 students who were stranded were originally planned for but 87 of them eventually made it to Ukraine because parents of the other remaining students had secured other options for their children.

The statement added that the feat recorded by Miss Abiola is one of the several indicators that the Aregbesola government in Osun has created a landmark in the area of education that cannot be overlooked.

The statement recalled that the government, convinced of the sanctity of its decision then, had ignored criticisms from certain quarters which condemned the decision by the state government to send the students to Ukraine.