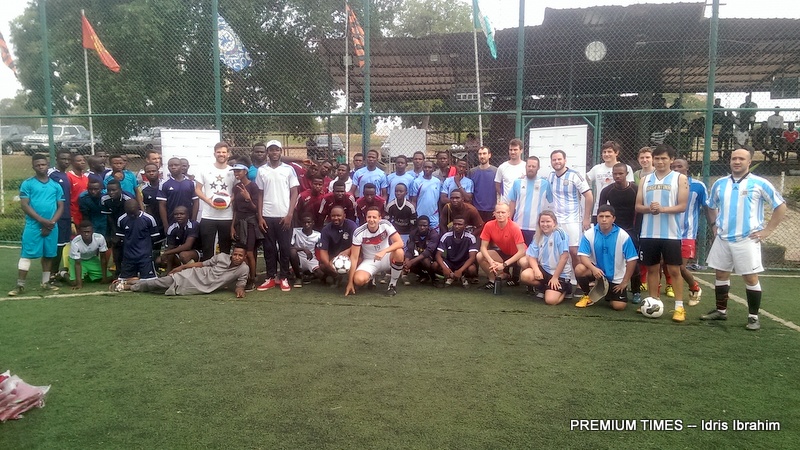 In what could be described as a replay of the 2014 World Cup final at the Maracana in Rio, Brazil; Argentina on Saturday in Abuja exacted their revenge on Germany.

Argentina prevailed 4-3 against Germany after a penalty shootout to win an international football tournament.

Known players such as Lionel Messi and Bastian Schweinsteiger were not eligible for the rematch, however, as Saturday’s tournament featured only players drawn from the Kuchingoro Internally Displaced Persons camp in Abuja and diplomats from Germany and Finland in Nigeria.

The tournament at the River Plate Turf Arena Abuja, was organized by the German Embassy in Nigeria and saw eight five-a-side teams locking horns.

The eight teams started in two groups from which the group winners and runners up progressed to the semi-finals predictably won by the global powerhouses, Argentina and Germany.

Each game in the group and knock-out stages was played over a duration of 10 gruelling minutes and was watched by a mammoth crowd at the posh River Plate Turf Arena beside a suya spot in the Central Business District of the Nigerian capital.

Although Chelsea were knocked out in the semi-final, they wowed the spectators with a stunning performance by their star player, Peter Edwin, who had scored the first goal of the tournament.

The West London impersonators were the only team with a 100 per cent record from the group stage before meeting their waterloo against the Germany Machines.

Speaking with PREMIUM TIMES, Ayaga Ayuba, Arsenal’s star player who aspires to play for Real Madrid someday, expressed his deep disappointed at not winning the losers medal with his team mates after having a good tournament.

“I feel so delighted for this wonderful competition organized by the German Embassy to enable us display our football talents on this ground”, he said in a post-match interview in Hausa.

“I will love to become a professional footballer but the complications against my dream is the unavailability of a good training pitch at our camp; and secondly, I don’t have the resources to buy football kits,” he added.

Zango Yusuf, Liverpool’s star man, also expressed disappointment with his team’s performance but said he was happy with the German Embassy for organizing the tournament.

“I was notified by our chairman on April 18 that a football competition to be hosted by the German Embassy was coming up, so I began preparation with the hope of showcasing my talent and probably winning the competition. It is so unfortunate we crashed out at the early stage, luck was not on our side”, he said also in Hausa.

The hope of the IDP players to win the competition was dashed by the two international teams at the semi-final stage where Team Chelsea lost 4-5 on penalties to Germany after a 1-1 draw, while Argentina defeated Arsenal 1-0.

Chelsea, true to their name, trashed Arsenal 4-0 in the third-place match.

The organizer of the tournament, Ludwig Zung, Press Officer of the German Embassy, said the idea behind the tournament was to reach out to the affected communities of the IDPs.

He said Germany had donated a small health clinic at the new Kuchingoro IDPs camp.

“As you can see, the matches were very competitive and very fair; the IDPs have very good football players.

“We had over 40 players from the IDP camp brought here by the National Youth Service Corps, NYSC, from the New Kuchingoro camp”, he added.

Earlier, the German Embassy had partnered with African Health Initiative and the NYSC to combat malaria and other diseases among the internally displaced persons in Abuja.

Speaking to PREMIUM TIMES at the event, Owhin Eguonor, clinic director of Gaucks Clinic, New Kuchingoro, said the clinic was a donation from the German Embassy. It was commissioned September 23 last year and named after a former German president, Joachim Gauck.

“We have various facilities for carrying out health care investigations ranging from malaria test, de-worming, HIV, urinalysis, blood sugar, glucose different test to ensure that these IDPs have the best health care for free”, she said.

“This is being put up with the whole idea of having volunteers who will come and offer their services and expertise in order to meet up with their health challenges. Presently, it is being sustained by the voluntary donations of individuals, philanthropist, visiting the camp. We have steady supply of drugs from different organizations and efforts are being made to sustain what has already been put on ground,” she added.

Results of the Tournament

Finally, National Assembly to disclose own budget after years of secrecy

Some abducted Chibok schoolgirls refuse to be ‘freed’ — Negotiator