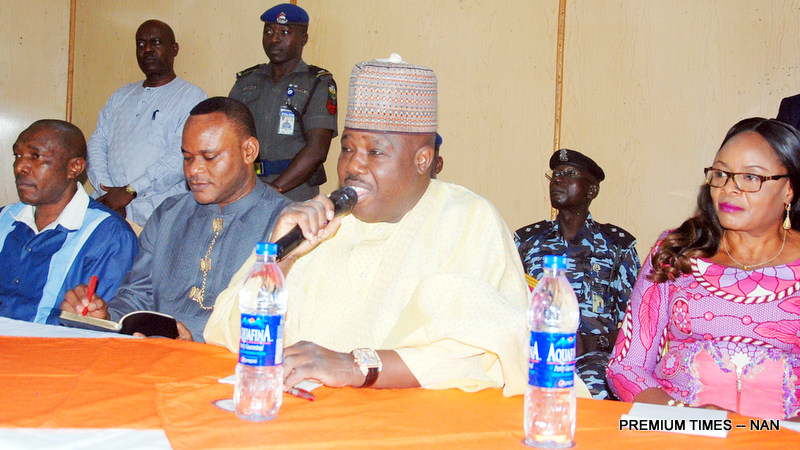 The Ali Modu Sheriff-led Peoples Democratic Party, PDP, has said it has more of the party’s governors in its camp than its rival faction led by Ahmed Makarfi.

The Deputy National Chairman of the faction, Cairo Ojougbo, who stated this in a telephone interview with PREMIUM TIMES, said of the 11 state governors elected on the platform of the party, five of them belong to the faction while three others identify with the Makarfi group.

Others are Ekiti, Ebonyi, Enugu, Abia, Taraba and Gombe States.

He listed those with the Makarfi group as Ayo Fayose (Ekiti), Nyesom Wike (Rivers) and Ifeanyi Okowa (Delta).

He said it was not clear where Governor Ibrahim Dankwambo of Gombe State belongs, saying he (Dankwambo) “speaks from both sides of his mouth.”

“Dankwambo has presidential ambition and that is why he has been speaking from both sides of his mouth.”

Asked why he was sure that the majority governors were in the Sheriff faction of the party, Mr. Ojougboh said, “We had meetings with them and they are ready for convention. We went to their states to meet them and if we call convention today they will be there.”

Speaking earlier on “Politics Today,” a programme on Channels Television, Mr. Ojougboh assured that his faction would accept the verdict of the Supreme Court where the suit on the crisis is pending, if it was ruled against it.

“If it goes in favour of Sheriff, by the grace of God we will open the door wide for everybody, we will bring everybody back, we will wave our handkerchiefs and we will tell Nigerians that we are very mature politicians.

“If it goes against us we will accept the Supreme Court judgement.  We will not oppose it and we will cooperate to the fullest and that is how you know the persons who are ready to work.

“Let me also say this very quickly. All the governors who are in the opposing camp, they have been boasting that they must win and that they are going to win in Supreme Court, but we tell Nigerians that the Supreme Court is no respecter of persons.”

The PDP, Nigeria’s former ruling party, has been enmeshed in leadership crisis since May 21 last year when its national convention sacked the acting National Chairman of the party, Ali Modu Sheriff and replaced it with a National Caretake Committee led by Mr. Makarfi, a former senator and former governor of Kaduna State.

Mr. Sheriff, a former senator and ex-governor of Borno State, however challenged its removal in court. This set the stage for more litigations some of which were won by the embattled national chairman and others by the Makarfi-led NCC.

In February, the Port Harcourt, Rivers State Division of the Court of Appeal affirmed the former Borno governor as the national chairman of the party.

The judgement was challenged by the Makarfi faction at the Supreme Court where the matter is pending.

Efforts by some senior members of the party, including former President Goodluck Jonathan, to resolve the crisis have been unsuccessful.