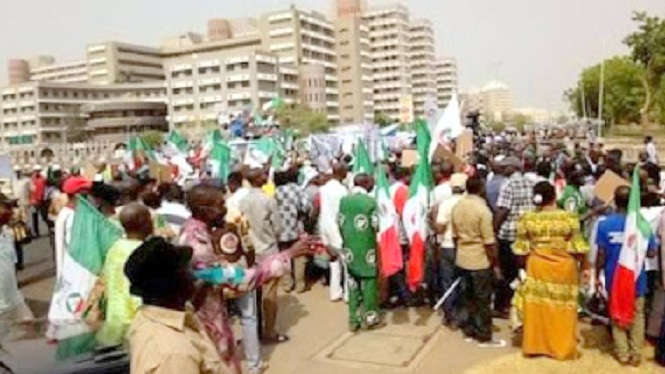 There was confusion on Monday at the Eagle Square, Abuja, as workers disallowed the acting permanent secretary of the Federal Ministry of Labour and Employment, Biola Bawa, from standing in for the minister, Chris Ngige.

Mr. Ngige had declined to address the workers in his capacity as the minister and sent the permanent secretary because he (Ngige) represented President Muhhammadu Buhari at the occasion.

But the workers chorused “no, no, no’’ at the move and continued to chant, “minimum wage, minimum wage.’’

The incident disrupted the May Day celebration for more than five minutes.

The News Agency of Nigeria (NAN) reports that as the workers surged toward the podium to protest the move, Mr. Ngige and top officials of the labour union had to step in to calm them.

The crowd thereafter shouted “we don win, we don win’’ as the permanent secretary stepped down from the podium and walked into state box.

NAN also reports that following the incident, many of the workers staged a walk-out from the square without taking part in the usual march past.(NAN)