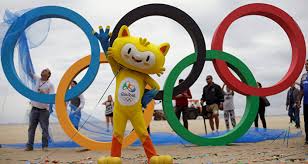 Guardians of the French language were up in arms on Friday after the French national Olympic committee adopted an English slogan to back France’s bid to host the 2024 Games.

The slogan “Made for Sharing’’ was adopted by the French Olympic Committee to back the bid for the 2024 Summer Games.

The Academie francaise, official custodian of the language of Moliere, said it was no better than a pizza advert.

Paris, Los Angeles, and Budapest are vying to host the 2024 games, and the committee has said it chose the English slogan to broaden its appeal for the wider world.

Another group whose aim is the defence of French usage said the choice was an insult to the French language.

It proposed instead the rallying cry of “Venez partager! (Come and share!).

Both groups said they would lodge an official appeal against the adoption of the English slogan.

The Academie francaise, expressing its disapproval, said the slogan had already been widely used in publicity campaigns, mainly for selling pizzas and sweets.

“French-speaking countries are going to be surprised and indignant that Paris, capital of the francophone world, bows down before a language that is not only that of Shakespeare but that of Donald Trump,’’ he said.(Reuters/NAN)