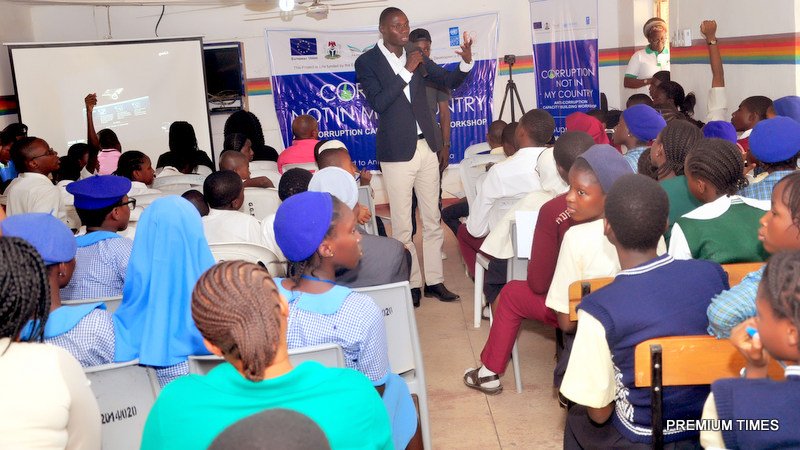 The creator of ‘Not In My Country,’ a pan-Nigerian campaign against retail corruption, has taken awareness campaign to students in secondary schools around the Federal Capital Territory.

The organiser said the capacity-building exercise will help prepare young Nigerians on ways of combating corruption and other forms of social vices that have been undermining Nigeria’s prospect of making progress.

The initiator of the project, Akin Fadeyi, who is also the director of his eponymous foundation, said: “corruption in Nigeria is responsible for her current political, social and economic quagmire.”

“This explains why Nigeria has witnessed backwardness in nearly all sectors within its corporate existence,” he added.

Mr. Fadeyi’s campaign, which is backed by the United Nations Development Programme and the United Nations Office on Drugs and Crime under the Project on Support to Anticorruption in Nigeria funded by the European Union, invited individuals from different walks of life to help engage the high school students on issues bordering on corruption.

A PREMIUM TIMES reporter, Samuel Ogundipe, spoke on the imperatives of shunning corruption.

Mr. Ogundipe, who spoke on the theme: “How to Identify Corrupt Practices,’ shared his experience with the youth on how he has never allowed monetary or pecuniary gains to obstruct his line of duty as a journalist who must consistently work within the ethical standards of decency as a watchdog of the society.

“Many times I have turned down gifts and money offerings which I sense might cuff my hands and prevent me from discharging my lawful duties as a journalist,” Mr. Ogundipe told the students. “This could be seen as a form of sacrifice as you know the free money will take care of some pressing challenges.”

“But in the long run, quick-fix solutions usually result in morass and decadence of the society in the long run. We must look away from instant fixes which lend a sturdy footing to corruption pillars,” he said.

He counselled the young students to be contented with whatever they have and eschew greediness, avarice and other forms of undue gratifications that could cause them to lose their integrity in the society.

The journalist also engaged the students in a question and answer session during which about a dozen students from different schools won cash prizes for giving examples of corrupt practices in public and private services.

Other speakers, including actor Jude Orhorha and Marylyn Iya of Speakers Corner, also tutored the students on what constitutes corrupt practices and how to avoid them.

Mr. Fadeyi’s ‘Not In My Country’, a made-for-TV drama that deploys wit and humour to underscore societal ills, held a similar training for secondary schools in Lagos in 2016.