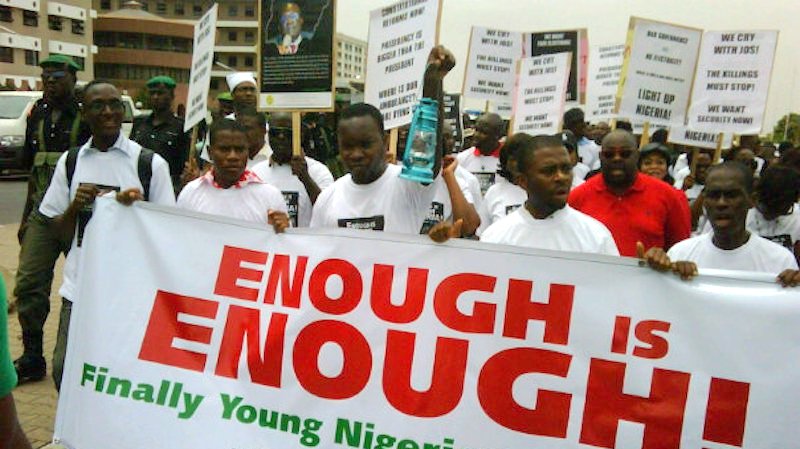 He made the assertion while responding to questions from journalists when he received a delegation of National Association of Nigerian Nurses and Midwives, Federal Health Institutions, NANNMFHI, in Kaduna on Sunday.

The team from the Ahmadu Bello University Teaching Hospital chapter of the association visited to brief Mr. Sani on their nationwide protest against alleged plight and sufferings of nurses and midwives in the employment of the Federal Ministry of Health, FMOH.

Mr. Sani described protests as the fundamental right of citizens.

He had called for a nationwide protest against Nigeria’s worsening economic crisis that has seen costs of goods and services skyrocket, with many families struggling to survive.

The planned protest gained traction with several public figures and civil society groups pledging to be part of it on Monday.

The Senator, while reacting to the cancellation of the protest, said “it is by encouraging people to embark on peaceful protests that you can discourage them against taking the option of violence.

“Nobody needs any police permit to organise a protest, you only inform them to provide protection.

“Protest against government does not mean opposition to President Muhmmadu Buhari.”

Mr. Sani said Nigerians spend over two billion dollars yearly on medical tourism in Dubai, United States Europe, Egypt and India, while a fraction of the amount can fix Nigeria’s decaying hospital and take them to international standard.

The association with members drawn from Federal Teaching Hospitals, Federal Medical Centres and Federal Specialist Hospitals, had embarked on a nationwide protest on February 1  to call attention to deteriorating infrastructure, equipment and non-availability of adequate medical consumables in various health institutions across the country.

Mr. Sani, while reacting to the plight of the nurses lamented that Nigerian leaders who are supposed to fix these problems do not patronise local hospitals.

“Instead they go on medical tourism for medical attention each time they catch an ailment as minor as cold.

“One trillion US dollars was generated on health in the last 50 years, it is shameful that no attention is paid to medical services in Nigeria.

“I came from a culture of protest and I so much believe in it. I encourage all of you (nurses) to pursue your course to a logical conclusion.

“Like I did to doctors, so shall I do to you nurses. I will take you to Abuja to formally present your complaints. If your complaints are not attended to, I will urge you to continue with the protest.

“We have reached a point whereby Egypt cannot pay their medical workers without patronage of Nigerians,” he said.

Jibril Abdulyekeen, leader of the delegation and National Treasurer/Northwest zonal coordinator of the association, said it has exhausted all known labour and legal means on the issues in contention, including the law courts. He said the association got judgement in its favour but that “the power that be refused to obey”.

“We are calling on the President , the Senate, the House of Representatives and Nigerians to prevail on the FMOH , its allies in the Federal Ministry of Labour and the IPPIS Office to do the needful and spare the country another round of industrial crisis.