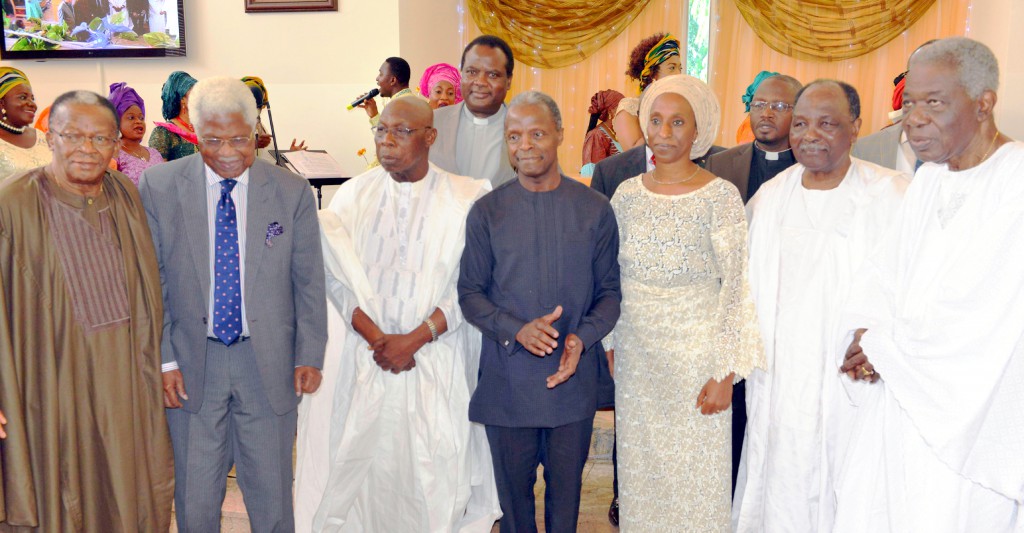 The Aso Villa Chapel on Sunday organised its annual end of the year thanksgiving with former Heads of State, Yakubu Gowon, Olusegun Obasanjo and Ernest Shonekan in attendance.

Vice President Osinbajo said the service was an exciting time to thank God for all he had done for the country during the year.

“They have been specially invited to come, we also expected President Jonathan, but unfortunately, he had to cancel at the last moment.

“So we are all extremely excited that we have been able to bring everyone together to thank God for our nation and to give Him thanks for the great future ahead of us,’’ he said.

Mr. Gowon said he was delighted to be at the service with other former colleagues and thanked Mr. Osinbajo for facilitating his attendance.

Mr. Gowon said he was more excited with the children who came also to do their thanksgiving and prayed to God to bless the children in a special way.

He enjoined the children to keep the faith with other Christians “to always make sure that we keep this country one and together.’’

He urged Christians to love every Nigerian in spite of their faith following the injunction of Jesus Christ to love your neighbour.

“Our neighbours are Christian, Muslim, traditional religions, among others. Whatever we do, we make sure that we live up to the expectation of what Christ expects of us,” he said.

The Senior Special Assistant to the President on National Assembly Matters, Ita Enang, thanked the Vice President and organisers of the service for bringing the past and present leaders to the service.

He said the nation was expecting good lead from the leadership in the coming year, noting that the event was specifically to thank God for helping the country to steer the economy of the country.

The Chaplain of the Aso Villa Chapel, Seyi Malomo, in his message said thanksgiving was an injunction from God, adding that everyone in spite of status must thank God in all circumstances.

According to him, thanksgiving is an acknowledgement that God is alive, adding that each time the faithful gave thanks they demonstrate their faith in God.

“As we thank God, He will restore the good days to the nation,” he said, and predicted that time shall come when people will queue in embassies to visit Nigeria.