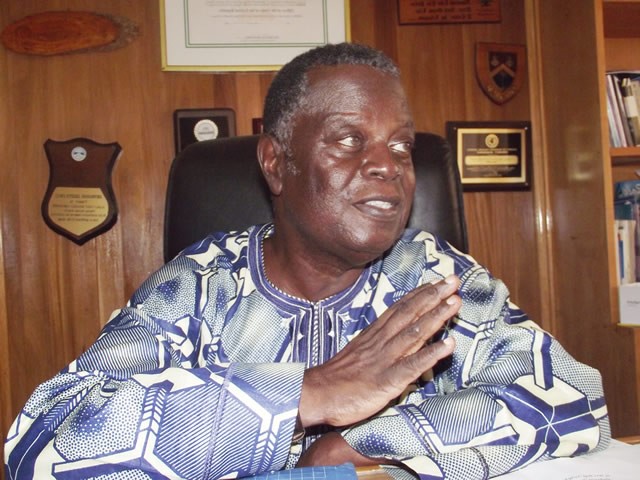 A Former Governor of Ogun State, Olusegun Osoba, and a former senator, Musiliu Obanikoro, were among dignitaries who paid tribute to the former Minister of National Planning, Rasheed Gbadamosi, on Thursday.

The dignitaries were among family members, friends, and sympathisers who participated at the funeral rites of the late playwright at his residence in Ikorodu, Lagos State.

Also present were the Oba of Lagos, Rilwan Akiolu, the Ayungbure of Ikorodu, Kabiru Shotobi, and White Cap Chiefs of Lagos, among others.

Seifudeen Olowo-oribi, the Chief Imam, Ikorodu Division, in his homily said, “we must all remember that death is one debt that we all must pay.

“We have taken him from his place of comfort – his house – to a place where there would be nothing like air, light or anything to feed. No one will come here to visit and rejoice with him.

“It therefore behoves on us all to ensure we live a good life while on earth.’’

In his eulogy, Mr. Osoba urged youth to emulate the late ex-minister’s virtues of commitment and passion for things that uplift humanity.

“We grew up together, we were classmates at Methodist Boys High School, Lagos and we’ve been together for over 60 years of his 72 years on earth; you can then see the length of our relationship.

“He was the youngest commissioner, a man that is known for creating records.

“He was the youngest in our class, one of the brightest, and in all his lifetime he created serious heritage that will be long lasting.

“He committed himself to everything that he believed in – the field of art, writing, music.

Also speaking to journalists, Musiliu Obanikoro, former Nigeria’s High Commissioner to Ghana, described the late businessman as one who had a positive impact on many Nigerians. “Uncle Rasheed Gbadamosi was more than a former minister to me; he was my benefactor, a man who had so many positive interventions in my life.

“As a young boy growing up in `Isale-Eko’, he was one of the role models that we looked up to at that time.

“It’s beyond what I can do with words because he meant so many things to so many people.

“He was very prominent in everything. He will be missed.’’

Rilwan Gbadamosi, son of the deceased, described the late economist as having lived a life that was exemplary.

“At age 29, he was the youngest commissioner. Name the achievement, my father virtually achieved it.

“He left a lasting legacy for the rest of his children. He’d educated all of us and we couldn’t have asked for more.

“My dad loved music but a lot of people did not realise it. You say you know about it but in the sense of what you really knew about him.

“A lot of my musical knowledge came from my father. Of course, he was involved in the arts and drama, but he liked all forms and kinds of music, something that a lot of people did not know him.

“He achieved his dream, wrote a few plays, managed to direct a few of his plays, he was even jailed for it once. Of course he had quite a historic career but he had a lot of fun doing it.

Kunbi Oshinnoike, daughter of the late economist, said her father “was a wonderful man with big heart.

“I’ll miss his cheeky, he was very cheeky, and he had a wonderful sense of humour, and that I am going to miss a lot.’’

Rasheed Gbadamosi died on Wednesday at the age of 73 at his residence in Ikorodu.