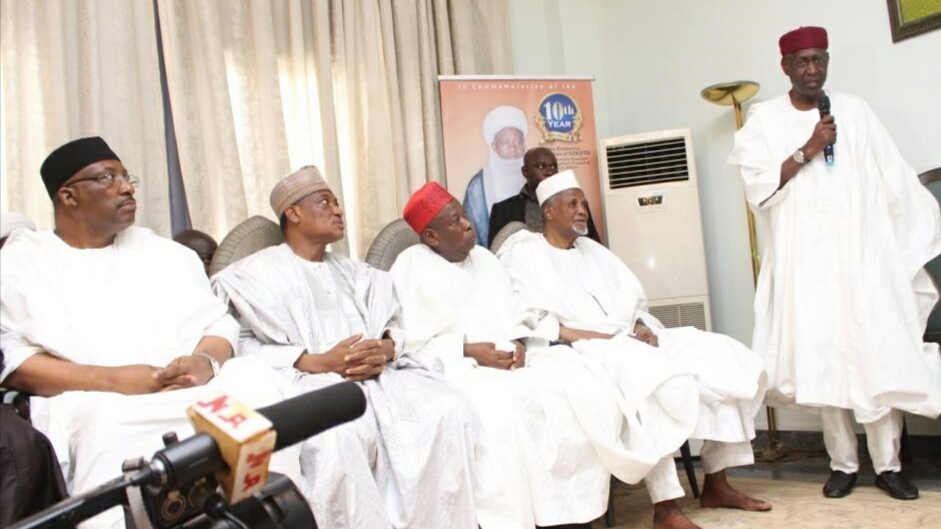 Chief of Staff to President Muhammadu Buhari, Alhaji Abba Kyari, delivering FG's condolence to Sultan Muhammad Sa'ad Abubakar when he led the Federal Government delegation to the burial of late Sultan Ibrahim Dasuki. Seated from left are Minister of Interior Abdulrahman Dambazau, Minister of Defence, Dan Ali, and others. Sokoto...Tuesday 15/11/16

Tributes have continued to pour in for the late former Sultan of Sokoto, Ibrahim Dasuki.

Mr. Dasuki died Monday night at a private hospital in Abuja, after a protracted illness.

Governor Aminu Tambuwal of Sokoto State in a condolence messaged described the late 18th Sultan of Sokoto as a pioneer reformist who deployed his wide knowledge of Islam and vast experience as a technocrat to make profound impact on his family, community and the nation at large.

In a message of condolence issued Tuesday in Sokoto by his spokesperson Imam Imam, Mr. Tambuwal said at every stage of his life, Mr. Dasuki gave his all to ensure communal harmony and educational development of the citizenry.

“The history of local government reform in Nigeria will not be complete without the mention of the important role Sultan Dasuki and his colleagues played in giving the country the present structure we are enjoying at the third tier of government.

“For the eight years Dasuki spent on the throne as Sultan of Sokoto, he gave priority attention to the educational development of our people by promoting adult and women literacy in all parts of Sokoto. He equally paid attention to the revitalization of religious education especially among Imams of various mosques in the Caliphate,” he said.

On his part, a renowned Islamic scholar, Ahmad Gumi, described late Mr. Dasuki as a reformist, progressive and goodhearted person.

Mr. Gumi spoke to the News Agency of Nigeria, NAN, on Tuesday in Kaduna shortly after the death of the late Sultan.

“We have lost a father. The nation has lost a father figure and one of the last few standing pillars of an ending era.

“His concerns were genuine; his advice were candid and true; humble in triumph and magnanimous in trials.

“The first Sultan without concubines and who shakes the hands of his subjects and abhor to be bowed unto,” Mr. Gumi said.

Also, the Gwandu Emirate Council in Kebbi described the late Mr. Dasuki as a great Nigerian who worked for the unity of the country.

The Waziri of Gwandu, Abdullahi Umar, said in an interview with NAN on Tuesday said the deceased had also worked tirelessly to unite the northern traditional institutions.

He said Mr, Dasuki had offered selfless service to Nigeria and worked for peaceful coexistence across the country, even after he was deposed as the Sultan in 1996.

The Wazirin Gwandu said Mr. Dasuki played enviable role in the emergence of modern local government administration, establishment of commercial banks among others.

“The former Sultan was a bridge builder who strived hard to unite the traditional institutions as well as ensure peaceful coexistence.

“He never relented in giving advice and support to leaders on the unity of the country even after he was removed as the Sultan in 1996,” he said.

Also on Tuesday, a senior counsellor in the Sultanate Council of Sokoto, Hassan Danbaba, described the late 18th Sultan of Sokoto as a pious and committed leader.
Mr. Danbaba, who is also the Magajin Garin Sokoto, said ”the late Dasuki was a peace lover and a peace maker in Nigeria and beyond.

”He had worked meritoriously to ensure national development and cohesion. His death is a great loss not only to his family, Sokoto State, but Nigeria as a whole.”

In his reaction, the former Governor of Sokoto State, Aliyu Wamakko, currently a senator, described Mr. Dasuki as “a gentleman who lived a life of total service to humanity.”

”He was a man of God and a man of peace,” Mr. Wamakko, who represents Sokoto Central Senatorial District, said.

Another senior counsellor in the Sultanate and Galadiman Gari, Aliyu Attahiru, said the death of Mr. Dasuki was a great loss to his family, the Muslim Ummah and the entire nation.

Mr. Dasuki was buried on Tuesday.

He was deposed as Sultan in 1996 during the military regime of late Sani Abacha.

Prior to becoming Sultan, he held the traditional title of Baraden Sokoto and was the first Sultan from the Buhari lineage of the descendants of Uthman Dan Fodio.

He was born on December 31, 1923 and was a close associate of the late Premier of Northern Nigeria, Ahmadu Bello, and a friend of the late Islamic scholar, Abubakar Gumi.

The late Sultan was influential in the founding of Jama’atul Nasril Islam.