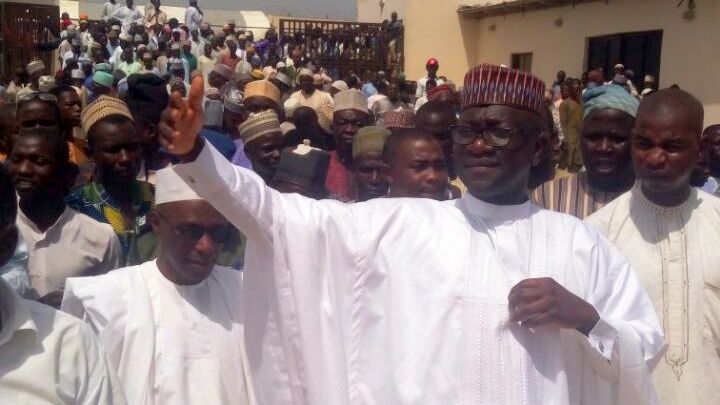 Abdulmumin Jibrin during one of his visits to his constituent

Suspended lawmaker, Abdulmumin Jibrin, on Wednesday distributed cash and material gifts as part of an empowerment scheme to mark the 100 days of budget padding scandal.

Mr. Jibrin, who is currently serving a year suspension slammed on him by the House of Representatives, returned to his constituency in Kano on Wednesday, where he gave out items such as motorcycles and generators.

Other items distributed by Mr. Jibrin included sewing machines, grinding machines as well as scholarship package for about 1,000 pupils.

A statement from Mr. Jibrin’s media office said no fewer than 5,000 constituents benefitted from the scheme, which he hopes would help mitigate the effect of the economic recession on their households.

“I have done many empowerment programmes before I ventured into politics, I continued when I was elected and I sustain the tempo despite my suspension.

“This is a clear testimony that we hold our people dear to our heart irrespective of politics,” the statement quoted Mr. Jibrin as saying.

Mr. Jibrin said he will not renege on his promise to remain a vocal voice against sharp practices in the Nigerian parliament.

The whistleblower was suspended for a year without pay on September 21 after being found guilty of ethics violations.

The suspension was the climax of months-long political and media battle he drove against Speaker Yakubu Dogara and other principal officers of the House.