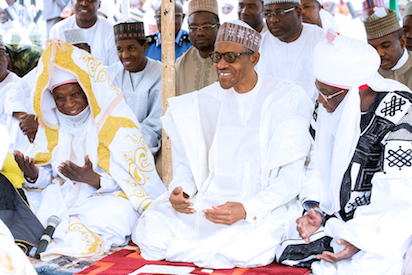 The News Agency of Nigeria (NAN) reports that the prayer, which started at about 9:45 a.m., was led by the Daura Emirate Chief Imam, Sheikh Safiyanu Yusuf.

In his sermon, Yusuf stressed the importance of sacrifice in Islam, adding that it could be done with ram, sheep, goats, cattle and camel.

Yusuf said the sacrifice could not be done with animal with one eye, ear, broken horn, cut tail, cripple, sick and malnourished, adding that no part of the sacrifice should be sold.

The Imam said the sacrifice should be done only with the intention of getting closer to the Almighty Allah.

“One should mention the name of Allah while slaughtering the animal,’’ he said.

Yusuf also said that sacrifice could also be performed two days after the Eid-el kabir day, and the meat given to the poor and needy.

President Buhari and the Emir of Daura slaughtered their rams after the prayer at the ground.

The prayer was attended, by the Emir of Daura, Umar Farouq, Director-General, Department of State Services, Lawal Musa Daura, Senior Special Assistant to the President on Media, Garba Shehu, traditional rulers in the Emirate, among others.

Eid-el kabir prayer is performed on 10th day of Zulhajj, the twelve month of Islamic calendar.(NAN)