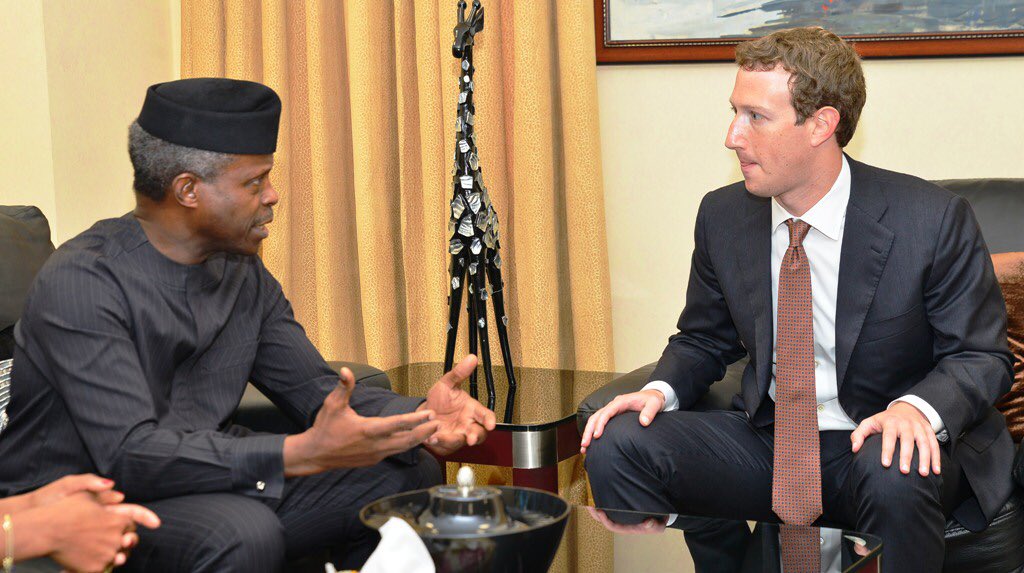 Nigeria to partner Facebook to improve ICT in Africa

The federal government said on Friday it was considering a partnership with Facebook towards improved ICT connectivity in Africa.

Vice-President, Yemi Osinbajo,​also said government was determined to ensure the country was built on the energy, innovation and creativity of its young people.

He was speaking at the grand finale of the Aso Villa Demo Day, an entrepreneurship development event sponsored by Sahara Group in collaboration with government, to celebrate creativity, innovation and entrepreneurship with focus on economic diversification, inclusive enterprise by young Nigerians.

“We are looking forward to cooperating with Facebook. In a couple of month, we would be working out ways we would cooperate, especially with connectivity and some of the great ideas Mark has to improve connectivity in Africa,” he said.

Mr. Osinbajo was responding to comments by Facebook founder, Mark Zuckerberg, who was special guest at the event to present three of the 30 winners who emerged from the event to pitch the most innovative ideas.

Mr. Zuckerberg, who said he was inspired by the ideas by the young Nigerians, expressed believe in them, saying he was looking forward to seeing how they would impact Nigeria and the world.

“This has really blown me away by the talent of the entrepreneurs and young developers in this country, particularly by the focus to build something that’s going to make a difference and bring change,” Mr. Zuckerberg said.

He said the ideas reminded him of when Facebook began, saying he did not set out to establish a company, but to build a something he wanted to see impact the world.

“That’s what I see people here doing; pushing through challenges, building things you want to see impact the world; things that would make a country great,” Mr. Zukerberg said.

“This is not going to be better for Nigeria and Africa alone, but the whole world. I am blown away by what you are doing. I believe in you. I’m looking forward to see what you do
​.​”

The Vice President said what the Facebook Founder demonstrated was to show “it’s possible not only to make one’s dream come true, but live it so fabulously to not only influence his environment, but the whole world.”

“One of the things you have done is to create connectivity across the world, for people to really be able to interact across tribes, races and countries, and feel as one family,” he told Mr. Zuckerberg.

He said Mr. Zuckerberg’s visit to Nigeria was energizing not just the young people, but everyone else, saying Nigeria would rely on its young people to build the country.

“Today, technology has created a level playing field. Technology has made it possible for everyone to sit somewhere in their little office or room to create wealth, create connectivity and all manner of things across the world,” he noted.

Sahara Group Chief Executive, Tonye Cole, said the decision to sponsor the event was informed by the passion to invest in Nigeria’s future, through the youth of today.

“The future is digital and about technology. If we are going to become sustainable, and move from this generation to the next, we must understand what the next generation is all about. A lot of Nigeria’s problems today can be solved through technical solutions sourced locally from the young talents.

He said if the young generations were empowered to think about those solutions now, they could achieve those objectives using technology.

Mr. Cole said the three winners, whose ideas were showcased at the event, would be guaranteed funding support by Sahara Group for their development.

He also assured the others to enjoy mentorship and guidance counselling through the Sahara Group’s extrapreneurship platform, which would match them with other people interested in their ideas and expertise.

Each of the winners, namely Tracology, a patented smart payment systems for utility companies; RecyclePoints, a waste recycling and social benefit venture for sustainable development, and Shuttlers, a multi-staff bus service to assist commuters resolve daily challenges around big cities, was given N3 million grant to develop their ideas.