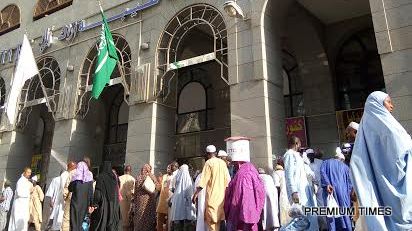 Pilgrims across states of Nigeria currently airlifted to Medina have hailed the National Hajj Commission of Nigeria (NAHCON) for providing accommodation close to the grand mosque in Medina and sticking to airlift schedules.

Nigerian pilgrims were usually lodged in hotels far from the Prophet’s mosque making access to the mosque for five daily prayers difficult for aged pilgrims.

Many of the pilgrims already in Medina from Kaduna, Kebbi, Sokoto, Kogi, Osun, Kwara, Abuja, Ondo and Zamfara who spoke on the accommodation, said the arrangement has eased the stress of long distance trekking of pilgrims to the grand mosque.

Tajuddeen Oyeyemi, a pilgrim, said such arrangement was the first recorded in the history of Hajj operation in Nigeria.

“NAHCON must be hailed for this achievement. We hear the call for prayers right inside our hotel rooms and everybody is happy to be just a wall from the Grand Mosque,” he said.

He however called on pilgrims to conduct themselves well, especially while queueing for food.

“The attitude of Nigerian pilgrims while queuing for food provided by NAHCON is sometimes very embarrassing and chaotic. I am calling on pilgrims to behave themselves,” he said.

The pilgrims also hailed the quality of aircraft provided by the carriers and schedules.

“Unlike many years ago, this is the first time that new aircraft’s are used and no delay of airlift was caused by the Airlines,” Bala Ahmed, a pilgrim from Sokoto, said.

Many pilgrims also appealed to NAHCON to provide accommodation in Minna close to Jamarat in Makkah.

“We hope that the tents in Minna will be near Jakarta, just like the accommodations provided in Medina.”

House of Reps has no power to insert projects in budget, SERAP tells Dogara