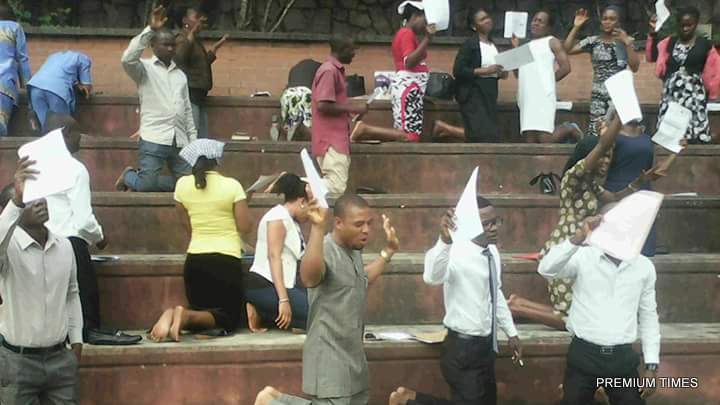 After waiting for about two years at home without any job, despite having received letters of appointment from the Akwa Ibom state government, some “unemployed teachers” in the state have publicly taken the matter to God.

The teachers, over 200 of them, gathered about 7.39 am on Saturday at the popular Ibom Plaza, in Uyo, the capital of the state, to pray for God to touch the heart of Governor Udom Emmanuel. They prayed for about two hours.

“We want God to touch his heart for his government to post us to schools for us to start work,” one of the teachers who was involved in the prayer meeting told PREMIUM TIMES.

“We are from this state, and we have the right to benefit from the resources of this state.”

Before now, the unassigned teachers said they had sent their appeals to the commissioner for education, the governor, and the speaker of the Akwa Ibom State House of Assembly, without getting any response.

The teachers took over the amphitheatre in the plaza in the morning. They knelt down, lifted their appointment letters to heaven, and kept on crying, calling on God for help, at an emotional session witnessed by other users of the plaza.

The Akwa Ibom governor, Mr. Emmanuel, said in January that many of those seeking employment into the state civil service were holding fake government employment letters.

“I am sure most of those who are making this noise (that government hasn’t paid salaries to new recruits) are those carrying fake offer letters,” Mr. Emmanuel said during a television interview in Uyo.

The governor said he was aware that job seekers paid money to get the fake employment letters, but that there was nothing the government could do about their case.

“If you have fallen victim of those fake offer letters, it is a pity there is nothing the governor can do in this regard,” he said. “We will ignore it.”

Aniekan Essien, a pastor in Uyo, said he considered the whole employment controversy as a “scam” on the part of the government.

“What is happening here is dehumanizing. It is a shame (to Akwa Ibom).”

In Abuja, a nosy night at a sex market

No trace of man missing in Abia for 3 weeks — Family