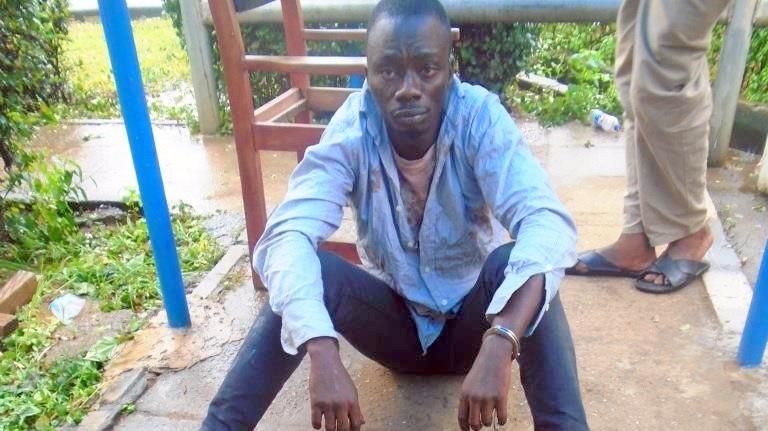 A suspected member of an eight-man robbery gang in Lagos has said his desire to drive a commercial bus lured him into armed robbery.

Abdullahi Olanrewaju, 30, said he was a commercial bus driver plying the Agege – Oshodi route before joining the robbery gang, according to a statement issued by the Lagos State Police Command on Sunday.

“But all of a sudden, the bus developed faults, and the owner had to sell the vehicle off. Since then, things have been very difficult for me,” said Mr. Olanrewaju, who hails from Ita-Amoju in Kwara State.

“I met other gang members at a beer parlour in Akerele Wahabi area in Agege. I told them I was a bus driver and they promised to buy a new bus for me.

“When they refused to buy the vehicle for me, they promised again that they would introduce me to one business that can make me become rich. I never knew it was armed robbery they wanted to introduce to me to.”

The police said Mr. Olanrewaju was arrested over the weekend during a robbery operation at Abeje and Onibeju Streets, off Capitol road in Agege Local Government area of the state.

The police, who were led to the scene of the robbery by Inspector Anthony Inege, said one of the victims who managed to escape through the window alerted them that armed men were operating in their building.

On sighting the police, the robbers opened fire on them, the statement said.

Mr. Olanrewaju said he met with seven other members of the gang at midnight at Markaz Road, in the Agege area.

“We operated from one building to the other. Although, I didn’t follow them inside but I was placed on standby outside. My job was to keep all the looted items including money.”

The suspect said they went for the operation with four, loaded, pump action guns and jack knives in case of any security operatives intercept them.

He said they had planned to rob all the houses on the two streets but were only able to visit five before the police arrived.

“We collected a lot of money, mobile phones and jewellery to mention a few,” he said.

“When we sighted the police approaching, we had no choice than to shoot them. We opened fire on them and they retaliated immediately.

“But when we noticed that we were about to run out of bullets, we decided to take to our heels. Unfortunately for me, while other managed to escape the police arrested me because I was unable to join the waiting vehicle.”

The police said the robbers made away with two pump action guns, N549,500, and other valuables.

One of the robbery victims, who did not want his name in print, said Mr. Olanrewaju led the other robbers to their house.

“That was the man who pointed gun at everyone of us threatening to shoot us if we fail to cooperate with them,” the victim said of Mr. Olanrewaju.

“They had to destroy my door room with sledge hammer before they could enter my room.”

Another victim, who lives on Onibeju Street, confirmed the allegation that the suspect led his colleagues to their building.

“It was a bad midnight for all of us,” he said.

“In fact, he hit one of our neighbors with the pump action. The man in question has been hospitalized receiving treatment.”

The victims of the five buildings they visited on Ibeje and Onibeju streets, besieged RRS’ headquarters to identify the suspect as the gang leader who threatened to “waste their lives.”

Dolapo Badmus, the Lagos State Police Public Relations Officer, said the suspect is helping the police with investigation in order to arrest the fleeing robbers.

Buhari should stop acting like grandfather of corruption – Fayose