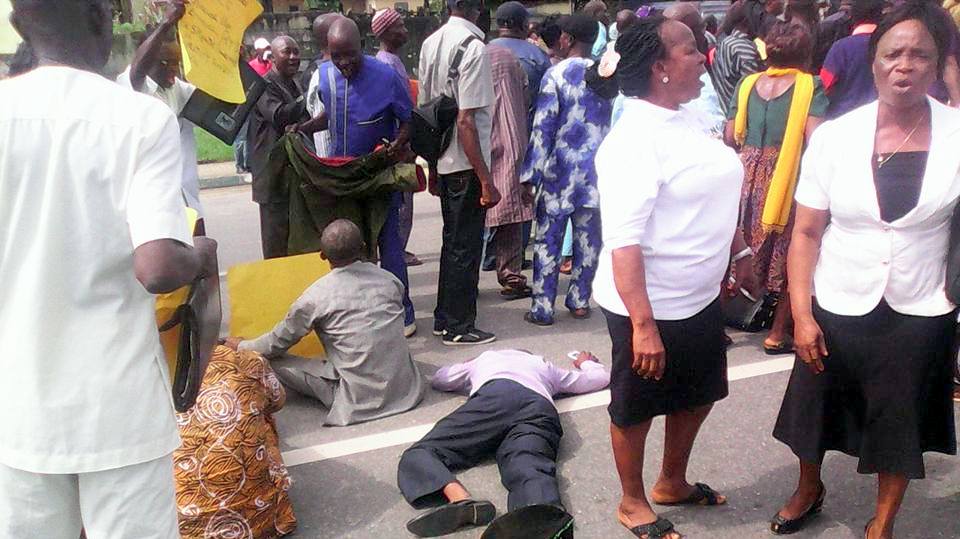 Monday, July 11, was Udom Emmanuel’s birthday. But there were no bouquets or partying in the Akwa Ibom capital city of Uyo to celebrate its governor.

What Mr. Emmanuel got, instead, as a surprise birthday “gift” was a protest march by local government pensioners who have been owed four months pensions, and gratuities, by the Emmanuel administration.

The old men and women, about 1,000 in number, marched to Wellington Bassey Way, which leads to the Akwa Ibom Government House, as early as 9am, with placards.

Some protesters sprawled on the asphalted road, while others sat by the pavements, blocking traffic to the government house, the state judiciary headquarters, the ‘A’ Division Police Station, and other government offices.

The police quickly drafted out their men into Wellington Bassey Way to ensure that the peaceful protest didn’t get out of hand.

There were about 10 police trucks parked at different points, on both sides of the road.

Mr. Emmanuel, PREMIUM TIMES learnt, was not in Uyo during the pensioners’ protest. But the leadership of the union was invited into the government house to hold talks with government representatives.

The secretary of the Nigerian Union of Pensioners, Akwa Ibom State, Cosmas Essien, told PREMIUM TIMES that the government’s claim that the pensioners were not owed was untrue.

“The little payment comes from federal and local governments.

“The accumulated arrears on pensions and gratuities are the parts that would have been contributed by the state government, to balance the amount of money to be paid (to the local government pensioners).

“We have consistently made requests for the payment, but they kept making promises which they never fulfilled.”

The Nigerian Union of Pensioners is the umbrella organization of other pension unions in the state.

Mr. Essien said their union was aware and had approved of the protest against the state government.

The position of the union contradicts the state government’s claim on the issue.

“We want to state categorically that Akwa Ibom State Government does not owe workers salary and has intervened regularly in the payment of pensions and gratuities to the local government pensioners,” Ekerete Udoh, the Chief Press Secretary to Governor Emmanuel had said in a press statement on Monday, shortly after the pensioners’ protest.

Mr. Udoh said it was not the place of the state government to pay pensions of local government workers, but that the governor on July 8 made funds available for payment for one month of pensions to them.

Mr. Udoh said Mr. Emmanuel made the same gesture shortly after becoming governor in 2015, when, according to him, he paid a 10-year backlog of pensions and gratuities to retired primary school teachers and local government employees.

“It must be stated here, again that it is not the responsibility of the state governor to pay salaries and pensions of local government employees,” Mr. Udoh claimed in the press statement.

The governor’s chief press secretary said the protesters were sponsored against the government. The pensioners’ union denied the allegation.

“We did not have an idea that yesterday was his (the governor’s) birthday. No politician sponsored the protest,” the secretary of the pension union, Mr. Essien, said.

“We did it out of persistent hunger and cries. Pensioners need money to buy food, drugs and pay house rent.

“When the government said publicly that they didn’t owe pensioners, they caused landlords who were lenient to pensioners to now want to throw them out of their homes because they think pensioners were deceitful.

Mr. Essien said the Commissioner for Local Government and Chieftaincy Affairs, Victor Antai, met recently with the union, and promised that the arrears on pensions and gratuities would be paid in matters of days.

Mr. Essien advised the government not to pay only to a handful, while leaving a large number of pensioners unpaid for months, adding that the union was ready to take more than 17,000 pensioners into the streets for more protests if the arrears were not paid.

CAN reacts to brutal killing of female Christian preacher in Abuja