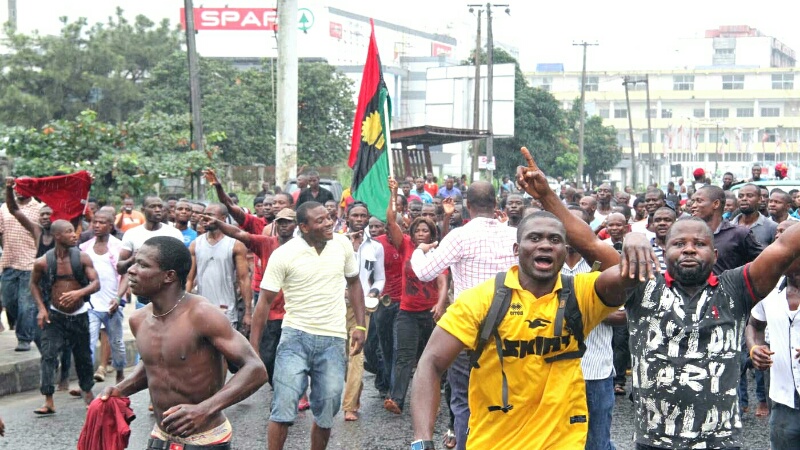 The police in Enugu on Monday arrested no fewer than 13 persons suspected to be members of the Movement for the Actualization of the Sovereign State of Biafra (MASSOB) and the Biafran Independent Movement (BIM).

The Police Public Relations Officer in the state, Ebere Amaraizu, said the people were arrested at Edinburgh axis of Ogui, Enugu, based on intelligence and information gathered on them.

According to Mr. Amariazu, “The suspects had converged with their Toyota hiace bus with registration number XG 265 UWN, flags and T-shirts with different inscriptions portraying MASSOB/BIM at Edinburgh axis of Ogui to commence protest march before the security operatives acting on intelligence/information closed them up and arresting them.

“Suspects in their reactions maintained that they are members of MASSOB and of Biafran Independent Movement (BIM).They further stated that they were to converge and pray at the spot before embarking on marching with their flags to commemorate their independence.”

Mr. Amaraizu said the state command had earlier warned against protest by any group of persons under any guise.

“No iota of lawlessness will be entertained from any individual or group of persons fanning embers of unlawful act aimed at causing breakdown of law and order in the state as the command working in partnership with other sister security Agencies has directed its security operatives to monitor and fish out those that will be in this habit so that they can be brought to book in accordance with relevant sections of the law,” he said.

He said items recovered from the suspects included flags with MASSOB inscriptions, t-shirts and caps.

Meanwhile, the Movement for the Actualization of the Sovereign State of Biafra (MASSOB-BIM) has raised the alarm that about 40 of its members were arrested by men of the Nigerian Police in Nsukka on Monday.

The zonal leader of Enugu North, James Omeke, told our correspondent that the members were arrested at the Saint Theresa’s Catholic Church premises where they were holding a thanksgiving mass in commemoration of the 49th anniversary of the declaration of the State of Biafra by the late Odimegwu Ojukwu.

“Such arrest and intimidation of our members will not deter us but will spur us in our struggle to freedom; what Nigerian government is doing to us is very unfair,” Mr. Omeke said.

“This shows how lawless Nigerian government is by disobeying the fundamental human rights of individuals.

“We were not violent; in fact we were surprised because we never expected the police to invade the church to arrest our members.

“This is a sacrilege committed by the Nigerian police, noting that “Church is a place of worship and our members known for their peaceful disposition besieged the church to thank God but were arrested and detained,” he said.

Efforts to get police PRO, Mr. Amaraizu, to comment on the Nsukka arrest was unsuccessful as several telephone calls to him were unanswered.

It was gathered that the MASSOB members marched through major streets of the University town of Nsukka to commemorate the 49th anniversary celebration.

Fayose dares Buhari to stop him from travelling abroad, says, ‘I can’t be cowed’