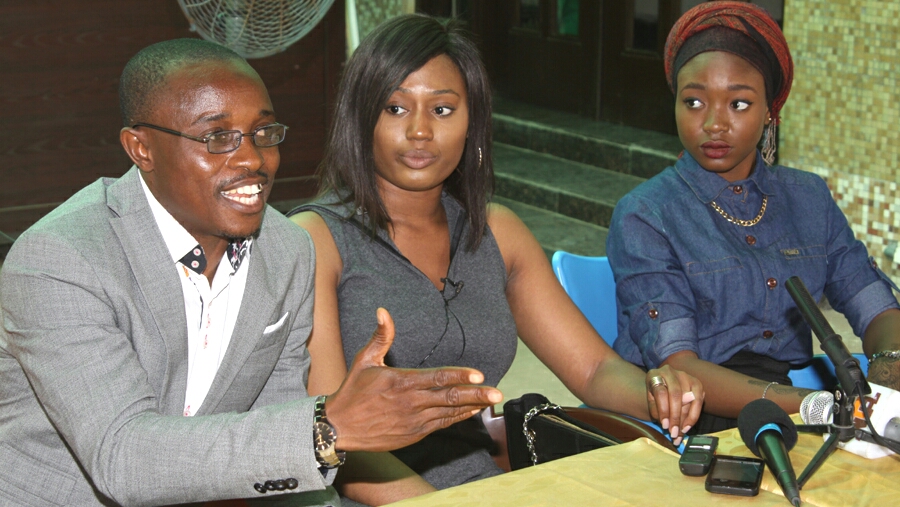 L-R: Lawyer to late Rashidi Yekini, Jibril Olanrewaju; daughters of the deceased, Yemisi and Omoyemi, during a press conference in Lagos on May 26, 2016.

Yemisi and Omoyemi, daughters of late football icon, Rashidi Yekini, have renewed their demand for an inquest into the death of their father.

The family said the circumstances of his death were unclear, for his two daughters, it has been difficult moving on without the exact knowledge of the cause of their father’s death.

“Your father has just passed away, you ask your mother how he died and she says I don’t know how he died; I think that is the worst thing that can happen to someone,” she said.

“You don’t know whether he was killed, or he was drugged, or he was ill; there are no answers, so I will like there to be an inquisition.”

Yemisi, who is schooling at Leicester City in the UK, expressed disappointment that the relevant authorities never considered investigating Yekini’s death.

“I requested it from the moment he died but as a 17-year-old girl if I say mum, I want the police to investigate this, nobody is going to listen to me. But come to think of it, do I really have to ask before this is done. If everyone is saying Rashidi Yekini was a great footballer, he is a superstar, if he is this … he is that, why do we need to ask, why is there not one, why can Nigeria not just take this up and investigate,” Yemisi queried.

The daughters vowed to do all within their ability to immortalise their late father, appealing to everyone to join hands with them to keep the memories of the goals king alive.

One of the things the family considered to do first, is to convert Yekini’s home into a museum and also organise a befitting testimonial match for him in the years ahead.

Yemisi and Omoyemi said they hoped to use Yekini’s Ibadan house to honour their father, even though most of the laurels Yekini won as a player were allegedly carted away from the house by family members just before he died.

“I and Omoyemi come from a great home; we both have great mothers and a great father, so we are not money-hungry children. We are not here to sell the house or get the money. What we both want is the house in Ibadan, which we (with Omoyemi) shared with our father. That is the one we want,” Yemisi hinted.

“We are not bothered about the money; we’ve been able to look after ourselves. I had the idea of turning his house in Ibadan to a museum. Mr. Olanrewaju Jibril (Yekini’s lawyer) told me that when he went to the house, everything was gone: all his trophies, his pictures, awards all gone. And that’s very sad because that’s something we would have used to remember our father,” she added.

However, Yekini’s lawyer, Jibril Olanrewaju, said there was pressure from the late footballer’s family to sell the house in Ibadan.

Family members allegedly abducted the 1994 African Player of the Year few days before his death, claiming he was mentally unstable, and carted away his property.

Mr. Olanrewaju assured that Yemisi and Omoyemi had the right to possess the property of their father in Ibadan, adding that the children were also planning a testimonial game for their father.

Mr. Olanrewaju said, “For now, they can (possess the house). When someone dies without a will, usually, you collect a letter of administration and because the property belongs to them, the two mothers are the administrators to manage the estate.

“We got the letter from the Registry of the High Court of Oyo State in December. Legally they (Yekini’s children) are in actual possession, though there is pressure from the family to get the house sold. But I have been persistently blocking them from doing that.

“The kids told me that they are not happy that their dad didn’t have a testimonial match before he died and that they would want to do that in his honour. They want a platform with which they can do that. They also want most of what their dad lived for, generosity and charity work, to continue.”

FEATURE: Five ways to save your tomato farm from pest attacks — Professor

Nigeria govt to open up coal deposits to investors—Minister