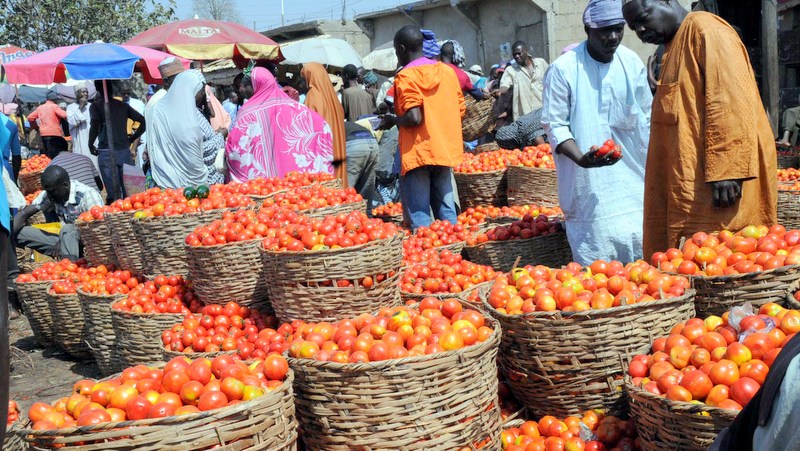 Nigeria’s Minister of Agriculture and Rural Development, Audu Ogbeh, on Tuesday said his office had commissioned experts to look into the massive tomato scarcity that has hit the country as a result of a plant disease outbreak.

He said this to journalists at his office.

According to him, the tomato scarcity was caused by the tuta absoluta ant infestation which had affected tomato plants in Jigawa, Kano, Katsina, Kaduna, Plateau and Lagos states.

“We waited this long to address the problem because we wanted to consult with experts to understand and proffer solutions to the problem,” Mr. Ogbeh said.

“Now, these experts who have been called in to appraise the situation, will set to work on methods that have worked in other countries on affected sites as soon as tomorrow.

“In the next few days, we will start treating affected sites, so as to stop the infestation and tomatoes can once again become available in the country,” he said.

According to him, the tuta absoluta ant actually originated from South America in 1912 and is spreading to other parts of the world like Europe and Africa.

“The tuta absoluta infestation came into Nigeria through Niger Republic, and in the last three weeks has managed to damage most tomato plants in the aforementioned states however, there was nothing the Quarantine service could do to stop it from coming into the country as the disease is being carried by insects.

“This is a matter of necessity as tomato has become scarce in the country with available tomatoes being sold for as much as N30,000 to N35,000 per big basket in Lagos state.

“In our research, we found out that ordinary pesticides cannot tackle the disease because the tomato moth multiplies so fast, it produces up to 250 offspring per cycle,” he said.

While addressing the cost to treat the infestation, the minister said the treatment would be expensive but will also take other forms apart from money.

“The experts we called in are yet to give us a figure on cost of treatment, but it is likely to be N5 per tomato plant, it could however cost more or less. So, we will source for funds to tackle it.

“We also need to educate farmers on how to control the infestation and we also need to raise new nurseries. The process is much like an immunization programme.

“The federal government is mainly an enabler in this case because it is the states who own the lands where these infestations have occurred. So, we will need to collaborate with the state governors and commissioners to put an end to this problem.”

However, he pointed out that in states like Gombe, tomatoes were still available and the government will do everything possible to stop the infestation from spreading to other states.

In an interview with PREMIUM TIMES, Salisu Bala, a tomato dealer at Garki Model market, Abuja, the tuta absoluta pest attack in Kano state, contributed greatly to the scarcity of tomatoes in the country.

The pest led Aliko Dangote to shut down his tomato paste factory in Kano.

“Within two weeks from the ending of March to April, most tomato plants from Kano to Zaria had died from the tuta absoluta pest attacks, so, now, tomato is like gold, when its available it is sold for a very high price, very different from what we are used to,” he said.

“We are working very hard to make tomatoes once again available so Erisco foods and Dangote tomato factory can produce home-made tomato paste for our consumption so we can stop importing,” he said.

The Garki Model market tomato association chairman, Ibrahim Ibn Ismail, told PREMIUM TIMES that the reason a lot of tomato plants are dying in the north is as a result of the acidity in rain water.

“Normally, the tomato plants are watered with borehole water which is clean enough to aid growth but as soon as the rains come, the plants begin dying because of too much acid in the rain water.

“The tomatoes I have now for sale are from Niger republic, although we have tomatoes available in Jos, Plateu state, but that is the only place we currently have them in Nigeria,” he said.