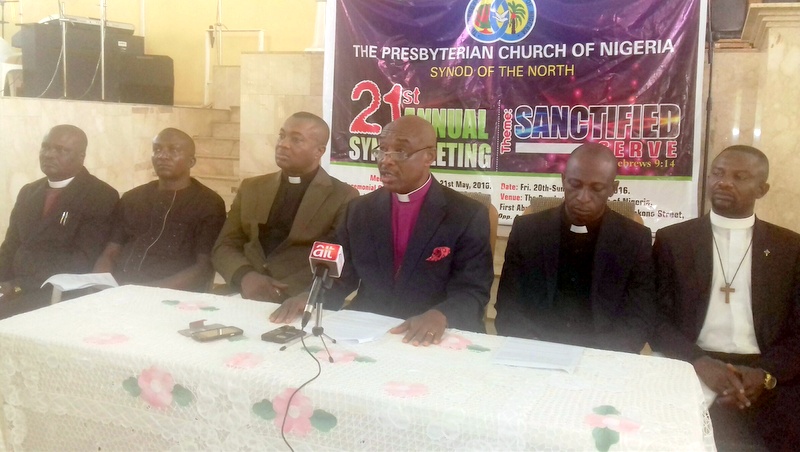 Presbyterian Church Synod of the North

The Presbyterian Church of Nigeria on Monday condemned the proposal by the federal government to merge Christian and Islamic studies into a single subject under the country’s basic education system.

The condemnation is contained in a communiqué issued at the end of the 21st annual meeting of the Synod of the North held in Abuja.

The moderator of the Synod, Ini Ukpuho, who read the resolutions jointly reached by all parishes in 19 states of the North, including the Federal Capital Territory, said the proposal if adopted would destroy the fragile minds of young Nigerian children.

“The rights of young innocent Nigerians would be impugned by this merger,” Mr. Ukpuho said. “The study manuals produced combine Christian and Islamic religious studies and national values into one curriculum.

“Our children, as very young, innocent minds, would be compelled to read materials that they ordinarily would not have had access to at their tender ages, and in the process take in religious views that their parents and wards did not intend to expose them to at their ages.”

Mr. Ukpuho said any attempt to force pupils to study both Christian and Islamic knowledge would amount to infringement and abuse of their rights, as it would expose them to information they would ordinarily not have wanted to know.

Urging government to consider returning the study of Christian religious knowledge in federal universities across Northern Nigeria, Mr. Ukpuho argued that a proper study of history was enough to acquaint children about the relationship between Christians and Muslims and how both religions developed in the country.

On the bill currently before the Kaduna State Assembly to regulate public preaching, Mr. Ukpuho said the Presbyterian Church was opposed to the proposed law, describing it as unconstitutional and illegal.

“The Synod of the North rejects in its entirety the Bill, and considers it a negation of the provision of the constitution on freedom of religion and right to fellowship by citizens in a democracy,” he said.

Mr. Ukpuho called on the federal government to punish all perpetrators of terror among herdsmen that have turned themselves into terrorists of fellow Nigerians.

Calling for the immediate investigation into attacks by herdsmen, the clergy said it was disturbing that none of the attackers had so far been arrested and tried.

On the fight against corruption, Mr. Ukpuho called on government to take it beyond the trial of selected few in the courts, while ensuring that it also included ethical re-orientation of the people to appreciate the basic virtues and values of godly living.

While commending government for the fight against corruption, he called on government to set up a more viable economic team, while also addressing the current controversy in electricity billing system across the country.