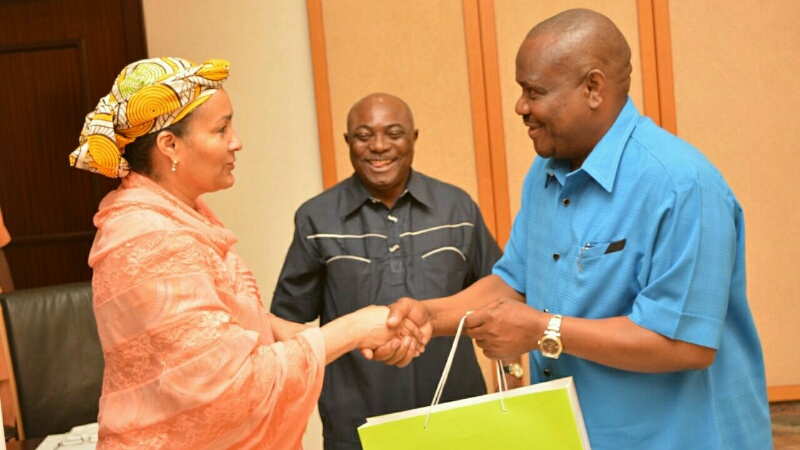 Rivers State Governor, Nyesom Ezenwo Wike and Minister of Environment, Hajia Amina Mohammed during the visit of the Minister to the Government House, Port Harcourt on Thursday.

The Rivers State Governor, Nyesom Wike, on Thursday said his state government requested to be included in the implementation of the UNEP Report because it is interested in a safe environment for the Ogoni people.

Also, the Minister of Environment, Amina Mohammed, said the implementation of the UNEP Report was above politics, hence the Rivers State Government would be involved in implementation process.

Speaking at the Government House, Port Harcourt on Thursday when he granted audience to the Minister of Environment, Governor Wike said although the UNEP Report was a Federal Government project, it was necessary for the Rivers State Government to be included in the processes.

He noted that it was necessary for the Federal Government to spell out the extent to which the Rivers State Government would be involved and the nature of its involvement.

He said: “We are interested in supporting the Federal Government to achieve the clean-up of Ogoni land,” the Special Assistant on Electronic Media, Simeon Nwakaudu, quoted the governor as saying. “That is why we seek that the state be carried along.”

“By requesting that we be carried along, we are not asking for contracts. We are only seeking to be involved in the process through information .

“Because we are committed to Ogoni land being cleaned up, that is why we are clamouring to be involved.”

In her remarks, Ms. Mohammed noted that the concern raised by the Governor was being addressed as the implementation of the UNEP Report was beyond politics.

She said the clean-up exercise was a long-term project that would last 25 years.

According to her, the interaction with stakeholders had led to more inclusion as they head towards the launch of the UNEP Report.