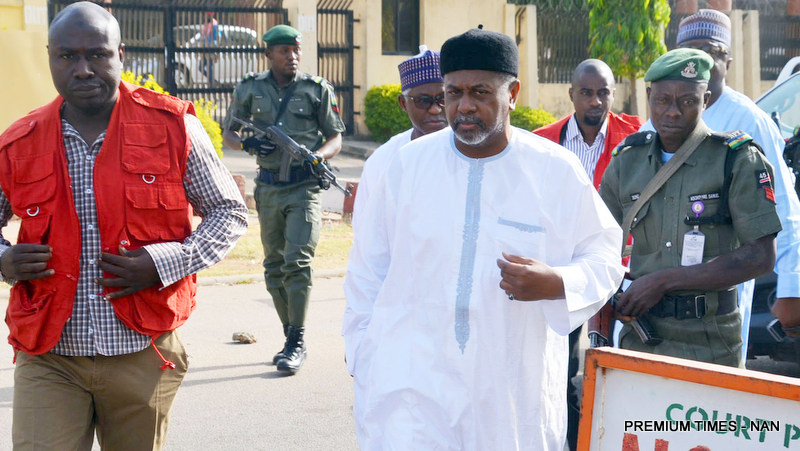 The ECOWAS Court in Abuja was today told that the security details, including soldiers, attached to the former National Security Adviser, Sambo Dasuki had not been withdrawn by the federal government when his Asokoro residence in Abuja was searched over allegations of unlawful possession of arms 48 hours after he left office.

An operative of the State Security Service (SSS), Williams Obiora, told the court that security agents, mainly soldiers, were still in the home of the former NSA guarding him when the DSS stormed the house in search of weapons.

Mr. Obiora said: “We got to the residence on the said date to discover that there were soldiers who guarded him in the house. Efforts to serve him a search warrant was resisted by the soldiers as they claimed that they couldn’t access him. So, we contacted our office which liaised with the military authority who advised the soldiers to allow us in because we were there legally. Eventually, we had access to the house and we executed the search.”

Led in evidence by the lawyer to the federal government, Damian Agbe, to justify Mr. Dasuki’s detention since December 2015, Mr. Obiora told the regional court that Mr. Dasuki was arrested and kept in custody for two reasons.

Among others, the witness claimed that the Ex-NSA was being kept in the SSS custody for his personal security in view of allegations against him on arm purchase and to also prevent him from possible escape from justice.

He said, “There are two basic reasons why he is still in our custody. One, for his own interest. For his own personal protection because some of the politicians implicated in the arms deal from the intelligence available to us…(he paused.) Two, there is intelligence indicating that he can get out of this country thereby evading justice. These are the two main reasons.

“In the course of the search, some of the suspected items that took us to the house were recovered. These include 5 Tavor Assault Rifles and others,” he said.

On whether Mr. Dasuki requested SSS for protection, Mr. Obiora said he was not aware if the former NSA made any such request.

“He does not need to make a request before we give him protection if his life is in danger, and we owe him a responsibility to ensure he suffers no harm.

Mr. Dasuki’s lawyer, Roberts Emukperuo, however said that there was no need keeping Mr. Dasuki in protective custody because he never requested protection from the SSS or anybody.

Mr. Dasuki’s counsel however tendered an affidavit by the SSS confirming that as at 24 August 2015, the SSS had completed the investigation, querying that “if it had been concluded there was no need re-arresting him?”

However, Mr. Emukperuo said the oral evidence given by the defence were mostly at variance with the documents filed before the court.

According to him, a party must be consistent in stating, proving and arguing his case.

“He cannot state one case in his pleading and in the process of arguing it, he takes a somersault,” he declared.

Mr. Emukperuo further averred that the evidence of Mr Obiora alluded to only two reasons why the applicant was detained.

“He did not mention national security. He said for his own safety and so that he won’t escape. He didn’t cite national security concerns. So, the evidence of Obiora did not support the statement of defence because they are at variance,” he added.

Having listened to the submissions by both parties, the presiding judge, Justice Friday Nwoke, fix judgement for June 29, 2016.

Mr. Dasuki had dragged the federal government before the regional court claiming that his fundamental right to freedom of liberty was being trampled upon by his detention since December 2015 without trial.

The ex-NSA prayed the ECOWAS court to order his immediate release and also a payment of N500million as compensatory damages for his unlawful detention and seizure of property.

No weapon found in Guest House
Also Thursday, the Federal High Court in Abuja was told that no weapons was found in Mr. Dasuki’s Guest House when it was searched by the operative of the SSS last year.

At the resumed trial of Mr. Dasuki on charges of unlawful possession of firearms, the government witness, Samuel Ogbu, who was under cross examination, said no incriminating items was found in the guest house by the security agent.

Mr. Ogbu, who is an operative of SSS was cross-examined by counsel to Dasuki, Ahmed Raji (SAN), said weapons were only recovered in the home of the former NSA

The witness told Justice Adeniyi Ademola that some money was found in Mr. Dasuki’s house but that he would not know whether the defendant committed money laundering offence or not because he did not know the definition of money laundering under the law.

Further trial has been adjourned till June 8 and 9 2016 at the instance of Mr. Dasuki’s lawyers.