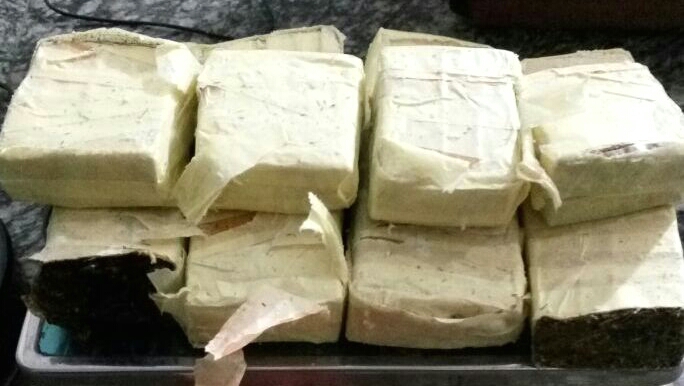 The National Drug Law Enforcement Agency (NDLEA) Thursday said it had arrested a 38-year-old mother of two at the Murtala Muhammed International Airport, Lagos, with 1.155 kilogrammes of cannabis hidden in melon and other foodstuffs.

Faith Obidike was caught by anti-narcotic officers during an outward screening of passengers on Kenya Airways flight to China, the NDLEA said in a statement.

The agency said the arrest had saved the suspect from execution in China where drug trafficking attracts capital punishment.

“It is sad that while government is worried over the number of Nigerians on death row in other nations, a mother of two children is still smuggling drugs to China where drug trafficking is punishable by death,” said Muhammad Abdallah, Chairman, NDLEA.

“Her arrest here has saved the country from embarrassment. It has equally prevented her family from the pain of losing a loved one under the circumstance. The NDLEA will not relent in saving lives and promoting the image of Nigeria.”

Mr. Abdallah, a retired Colonel, said the NDLEA needs fund to embark on aggressive anti-drug public enlightenment, adding that most Nigerians in foreign prisons for drug trafficking did not depart Nigeria with narcotics.

“Most Nigerians who are in foreign prisons for drug trafficking did not take drugs from Nigeria,” he said.

“Some others were lured with fake promises of job opportunities by members of drug trafficking organisations only to find themselves stranded and vulnerable to drug trafficking.

“Those travelling abroad in search of greener pastures must make adequate preparation for the period they will stay and also possess requisite technical skills. We are planning elaborate public sensitisation campaign to address this challenge.”

Ms. Obidike said she was contacted by her friend on social media to smuggle the drugs to China.

“I am a trader,” said the suspect who lives in Onitsha, Anambra State.

“I used to travel to China to buy my goods since 2014. My WhatsApp friend asked me to buy the drug and take to China.

“He promised to give me a handsome reward when I get to China. Unfortunately, the drug was detected during search at the Lagos airport. I am married with two children.”

The NDLEA said it is continuing investigations and would charge the suspect to court soon.

Saraki, others meeting with NLC leaders in bid to end strike