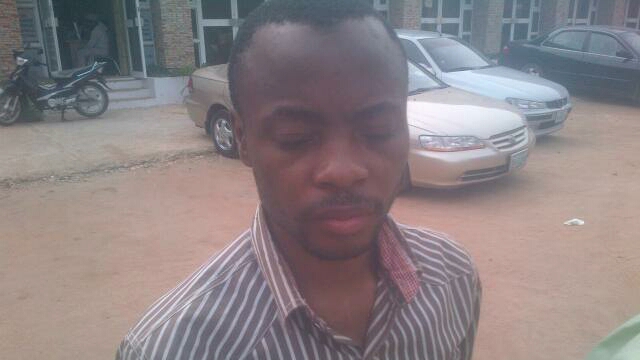 Blind graduate puts up own kidney for sale

A 32-year-old visually impaired man, Kamilu Suleiman, has decided to sell one of his kidneys to further his education.

A graduate of Electrical Electronics from Kaduna Polytechnic, Mr. Suleiman did his Youth Service Corps in 2014.

Explaining the reason for his decision, Mr. Suleiman said, “Frustration is what brought the idea of my readiness to sell one of my kidneys just to get money to sponsor my education. I really want to be useful to the society. I don’t want the effort of my parents to go in vein.

An indigene of Ilobu in Osun State, Mr. Suleiman was born and grew up in Kaduna State as the second of 7 children.

While explaining how he lost his sight, he stated that he was diagnosed with Glaucoma at the National Eye Centre Kaduna in 2009, but lost his sight completely in 2012 .

“I was posted to Plateau State but requested for redeployment back to Kaduna due to my condition. After I became completely blind I decided to live with a friend to avoid my parents seeing me in this condition because I don’t like seeing them worried.”

Mr. Suleiman said his goal is to study courses and programs that will enable him maximise his present situation.

“So I’m appealing to well meaning Nigerians to help me with a job or scholarship to further my education. I have applied to various media organizations seeking for job but I didn’t hear anything positive.

“My effort to look for somebody to sponsor my Masters program didn’t yield result. I just want to further my education so as to be useful to society and help others in my condition too.

“My parents don’t have the money and I don’t to be a burden on them,” he said.

He explained some of the steps he has taken to seek support from influential Nigerians.

“I got a letter from Jama’atul Nasril Islam (JNI) to my governor, Rauf Aregbesola, in 2014. Another letter to Chief Imam of Yorubaland, Mustapha Ajibade, and to the Chief Imam of my home town seeking for assistance but I’m yet to hear from them.

“The letter to the governor I gave it to his personal Assistant, Alhaji Sikiru. I also spoke to Deputy Speaker House of Representatives who is from my home town, Lasun Sulaiman Yusuf, who also promised to help me but as I speak to you he has stopped picking my calls,” he said.

Mr. Suleiman said he had also sent a letter, through courier, to Shehu Sani, an activist who currently represents Kaduna Central in the Senate.