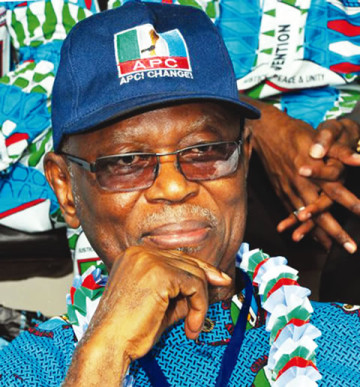 The All Progressives Congress, APC, has ‎hailed the N6.08 trillion “Budget of Change” personally presented by President Muhammadu Buhari to a joint session of the 8th National Assembly on Tuesday.

‎APC’s National Chairman, John Odigie-Oyegun, assured that many of the promises made to the Nigerian electorate by the party in the course of the 2015 presidential campaign are contained in the proposed 2016 National Budget.

Mr. Odigie-Oyegun ‎stated that the present administration’s pro-people policies would be implemented full blast in the coming 2016 financial year.

“In fulfilment of APC’s election promises to the Nigerian electorate, the Party welcomes the proposed Social Welfare Programmes contained in the proposed 2016 National Budget submitted to the National Assembly. President Buhari has proposed N500 billion to pay unemployed Nigerian graduates (post-NYSC grant) and feed school children, amongst other social welfare programmes in 2016.

“A phased Social Welfare Programme created to cater for a larger population of the poorest and most vulnerable Nigerians upon the evidence of children’s enrolment in school and evidence of immunization has also been proposed to the National Assembly.

“President Buhari has also promised that 500,000 new teachers would be recruited.

“Compared to the last 16 years of locust, Nigerians are getting a much better deal from the seven-month old APC-led administration. On the strength of these proposals, the future holds more dividends of democracy for Nigerians.

“It is reassuring that the federal government has recovered huge sums from looters of our common wealth, which will be injected into the 2016 National Budget,” He said.

The APC National Chairman called for speedy passage of the proposed 2016 National Budget.

‎”The APC hails the very cordial working relationship between the 8th National Assembly and the executive arm of government, specifically the President.”

Mr. Odigie-Oyegun said in presenting the proposed 2016 National Budget in person, President Buhari has demonstrated his commitment to Nigeria’s constitutional democracy and the dictate of the rule of law and also highlights the importance of building a smooth working relationship with the National Assembly.

‎This is the first time in three years that a Nigerian President would personally present a budget before the National Assembly.