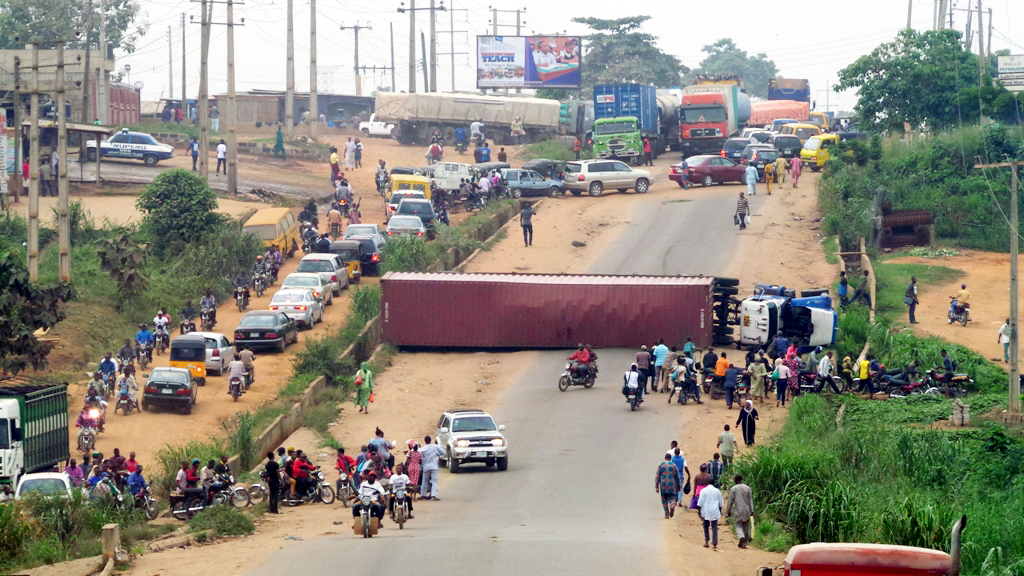 Forty-eight hours after a 40-foot container truck fell off the Ojuelegba Bridge along Funsho Williams Avenue , Lagos State, killing three persons, another incident had also occurred along the Ikorodu-Sagamu Expressway, on Friday.

The News Agency of Nigeria (NAN) reports that no life was lost in this latest incident which occurred at Winners Bus Stop, located between Lagos State Polytechnic and Jubilee Estate in Ikorodu, Lagos State.

The truck with a Lagos licence number plate , JJJ-933 XA, was said to be ascending a hill en-route Lagos road, Ikorodu, when it lost control and fell on its side.

It fell across the entire breadth of the dual carriage way and prevented both motorists and other vehicles from using the major road.

A witness, simply identified as Kabiru, who lives few meters away from the scene, told NAN that “the accident happened at about 2.30 a.m on Friday.

“We heard a loud noise and when we came to the scene, we saw that it was a container truck that had fallen.

“We didn’t see the driver of the truck by the time we arrived.”

A resident of the area, Chioma Amadi said, “This sort of accident used to happen here, and on some occasion lives are lost.

“A similar fatal accident happened here about four years ago which claimed the life of a polytechnic lecturer’s pregnant wife.

“But the government has failed to address our plight.”

Another resident and a business woman, Folashade Aina, said cases of fallen articulated vehicles were a regular occurrence on the road.

She attributed this to reckless driving, the rickety trucks used by some of the truck owners and the deplorable state of the Ikorodu-Sagamu Expressway.

“Incidents of fallen containerised -trucks and petrol tankers are a regular occurrence here, especially because of the many companies and industries that are sited between Lagos and Sagamu in Ogun.

“The trucks are either owned by some of the companies or their contractors.

“Imagine if such a loaded truck falls on someone’s car, it will take the grace of God for the occupants to survive it and be alive.

“We are lucky this one happened early in the morning; otherwise, it no doubt that it would have claimed lives.

“We should thank God that no life was lost in this latest incident.”

Ganiu Adekanbi, a panel-beater in the area wondered why the recurring cases of fallen trucks in the area had yet to be addressed.

“On Wednesday, it was at Ojuelegba, today it is here in Ikorodu. Imagine the thousands of people who ply this road daily and each time an accident occurs, the entire road becomes impassable.

“Think of the ripple economic effect of the delays this will cause, people are stranded, businesses suffer and money is lost.

“The Lagos State Government should find a lasting solution as well as penalise owners of such trucks.”

Mr. Adekanbi said alternative roads should be constructed to ease the challenges commuters and motorists face on the road.

Meanwhile, many passengers who had hitherto boarded other vehicles either abandoned them or boarded commercial motorcycles.

On their part, commercial motorcyclists who plied the route took advantage of the situation to hike fares.

For instance, the fare on a trip between Odogunyan Bus-Stop and Garage Roundabout on the Lagos Road, in Ikorodu, which normally goes for N150 has now risen to between N200 and N250.

NAN reports that the 40-foot truck had yet to be removed as at the time of filing this report.

An official of the Lagos State Traffic Management Agency,(LASTMA) who did not want to be named, said, “this is going to be a major exercise”.

He added, “We are aware of the delays this will cause most motorists and commuters, but we are doing everything to ensure that impatient and indiscipline motorists don’t cause further chaos. “We are expecting the towing trucks to arrive any moment from now.”