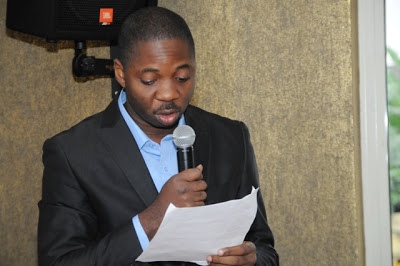 A Federal High Court sitting in Lagos has granted bail to Seun Oloketuyi, a blogger, who was remanded at Kirikiri Maximum Prison last week for publishing damning details of an alleged illicit affair of Fidelity Bank Managing Director, Nnamdi Okonkwo.

Mr. Oloketuyi was accused of defaming the banker by publishing on his blog, naijahottestgist, a story of an illicit affair between Mr. Okonkwo and one of the bank’s employees.

He was charged, curiously, by the Special Fraud Unit of the police for the violation of Section 24 (1) (b) of the controversial Cybercrime (Prohibition Prevention) Act and Section 375 of the Criminal Code Act, Cap C38, Laws of the Federation, and was ordered by Justice Mohammed Yunusa to be remanded in jail on August 25, 2015 after the judge refused to admit an oral application for his bail by his counsel, A.A Adetunji.

But when the bail application came up for hearing on Tuesday, Muiz Banire, the legal adviser of the All Progress Congress, APC, who had taken over as the lead counsel of the accused, argued that his client was ambushed by the prosecution and was wrongly sent to prison.

He argued that Section 158 of the Administration of Justice Act 2015 mandates that if one is being charged to court he must be aware of the information to enable him prepare.

Mr. Banire also added that since his client was accused of a bailable offence, the Administration of Justice Act makes it the responsibility of the prosecutor to convince the judge why he should not be bailed.

“You cannot bring ordinary sheet of paper before your lordship to charge a person to court for a crime,” he said.


“It would be a trial by ambush. The accused is still presumed to be an innocent man and the offence which he has been charged with is a bailable one, it is an entitlement unless the prosecutor proofs otherwise.

“They took the case to the Special fraud Unit of the police, when there is no evidence of fraud or any mention of fraud in charges against him,” he said.

He therefore urged the judge to use his discretion to grant the accused bail.

He said the accused is an entrepreneur with employees, a father with two children and a wife who just gave birth.

He also informed the judge that the mother of the accused, who is hypertensive was in court despite pleas for her not to come. He argued that the accused was a responsible citizen and had suffered enough having spent one week in the notorious prison.

The prosecutor, Olakanmi Omisope, told the court he “vehemently opposed” the bail application.

He described the blogger as a “serial blackmailer”, saying he was handling another case involving the accused. He urged the court to grant accelerated trial of the case instead of granting the accused bail.

After listening to the arguments of the counsel to the accused and the prosecutor, the judge, Mr, Yunusa, granted the accused bail in the sum of N3 million with two surety in like sum.

He ruled that one of the sureties must be a relation of the accused and the other must have a landed property. He also declared that the prosecutor must be involved in the bail process to make sure that the accused fulfil the bail requirements.