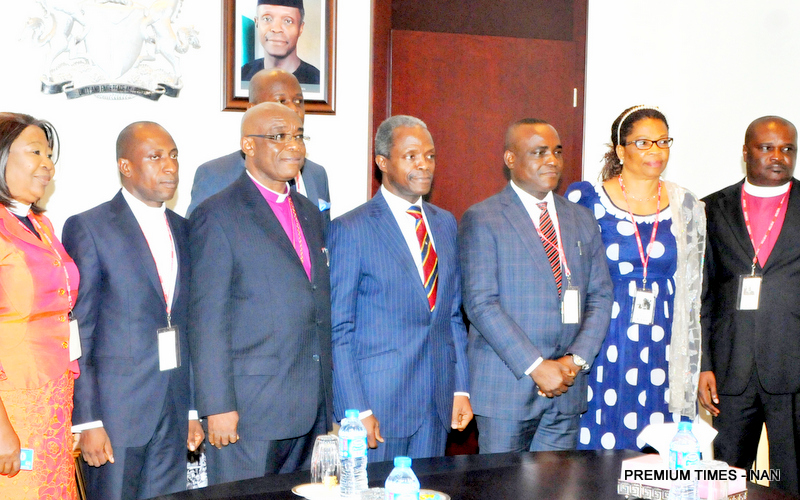 As the Presbyterian Church marks two decades of spreading the gospel in the northern part of Nigeria on Sunday, Vice President Yemi Osibanjo, has challenged the church to continue to partner the government towards national re-orientation and re-awakening of ethical values.

The Vice President was speaking in Abuja on Thursday when the Moderator of the Synod of the North of the Presbyterian Church of Nigeria, Ini Ukpuho, paid him a courtesy visit in his office as part of activities to commemorate the 20th anniversary celebrations of the Synod.

The Vice President acknowledged the historical role of the Presbyterian Church in national transformation through its early missionary leaders, saying the present generation should strive to use its pulpits as a platform to provide direction to its members towards national revival.

Although he regretted that the church has not done enough to impact the society positively, by helping to emphasise character building and integrity of the people, Mr. Osinbajo said church leaders needed to step up efforts to help redefine their role towards national rebirth.

“The Church has a special role to help in re-moulding the character of the people and build integrity,” he said. “The Church should pursue national values and national re-orientation. After 20 years, the great works started by the early Presbyterian missionaries many years ago should be continued in greater vigour.”

On efforts to resolve the intractable power problem in the country, the Vice President said government’s concern was to liaise with the relevant regulatory agencies to deal with the critical issues of transmission and power generation after the last privatization exercise.

He said government was working hard to resolve the challenges faced by power consumers in payment of bills, saying very soon a card payment system would be introduced to ease their problems.

On corruption, he said government was not interested in victimizing anyone through the ongoing probes, but to ensure that people understood that there was a consequence for every act of impunity and corruption perpetrated while in office.

Earlier, Mr. Ukpuho had told the Vice President that his visit was to brief him on the anniversary celebration of the Synod’s mission work in the Northern part of the country since 1995 as well as 60 years of gospel witness in the region.

“We are using the opportunity of this landmark year to take stock of the mission work in the north and to re-strategize for greater exploits in expanding God’s kingdom and impacting our nation and the world at large,” he said.

Mr. Ukpuho urged the Vice President to consider the Presbyterian Church as a faithful partner in government’s effort to enthrone righteousness, justice, peace and development in Nigeria for the good of the people.

“We believe the days of Nigeria’s greater glory are here. Historically, Presbyterianism has been known to be agent of national transformation,” he said.

Noting the effort of government to re-engineer Nigeria, particularly in the areas of security, power supply, war against corruption and the economy, Mr. Ukpuho said adequate attention should be given to a metering system to save the people from being ripped off with estimated bills.

On the economy, the clergy said the contributions of faith-based groups should be encouraged and included in government economic policies, particularly in the provision of social services like schools, hospitals, boreholes, roads, civic and moral education.

He commended government’s effort to build a regional coalition and international cooperation to overcome the menace of Boko Haram, pointing out that the church remained optimistic that the issue of insecurity would soon be resolved, with the celebration of the rescue of the missing Chibok girls.