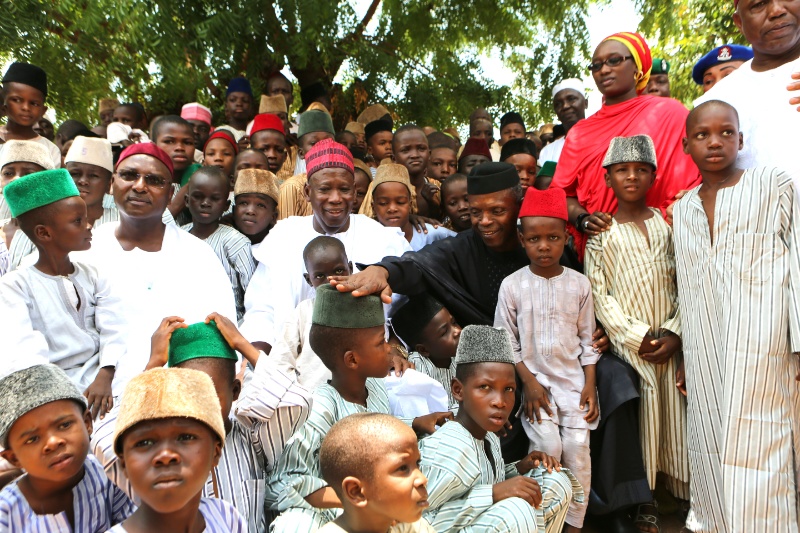 Vice President Yemi Osinbajo on Saturday in Kano, told children displaced by insurgency not to lose hope as the Federal Government was committed to providing for their future.

Mr. Osinbajo gave the assurance at the Internally Displaced Persons’ School in Mariri, Kano, where some 100 children from Borno were receiving education and psychological therapy, courtesy of the Kano State Government.

President Muhammadu Buhari’s administration is committed to the Presidential Initiative for the North East (PINE) Project to take care of all those affected by insurgency in the country, he said.

He recalled the interaction the president had with the PINE Committee headed by Theophilus Danjuma in Abuja, adding that besides educating the children, the government was interested in rebuilding places destroyed by terrorists.

He said PINE was a huge plan that had immediate, medium and long term plans.

He added that “part of that is the education of children who are displaced. Part of that also is resettlement, the rebuilding of homes and bridges and de-mining of farms”.

The vice president said several farms in the North East had been planted with mines by the insurgents and that it was the plan of the Federal Government to remove all the impediments in the land.

He said the government was doing a comprehensive de-mining of the affected areas to enable the displaced persons to return to their communities to resume their businesses and economic activities, including farming.

He explained that the IDP school established by the Kano State Government was a creative and humanitarian project, given the circumstances of the children.

He noted that the Kano State Government had demonstrated to others how to show concern for the future of the children.

He said “despite everything that has happened to them, it is obvious that the children’s future is bright.’’

He noted that what was important was to create several more opportunities for the children and thanked the proprietors of the school for giving the children hope.

Mr. Osinbajo said the Federal Government would collaborate with the state governments to cater for the displaced persons.

The vice president, who earlier interacted with the children and posed in a group photograph with them, told them that their present circumstance had nothing to do with their future but rather to strengthen and make it better.

He then prayed that the children would grow up as leading examples of the nation.

Earlier, the Deputy Governor of Kano State, Hafiz Abubakar, said the school was opened on April 20, 2015 as part of support to the children ravaged by insurgency in Borno, Yobe and Adamawa.

He said it started as an orphanage but had grown to a centre that offered education and care to the pupils.

Mr. Abubakar said that the centre had primary one and primary two pupils running full curriculum in education with full boarding facilities.

A pupil of the school, Musa Seidu, thanked the vice president for the visit and the Kano State Government for taking good care of them in the school.