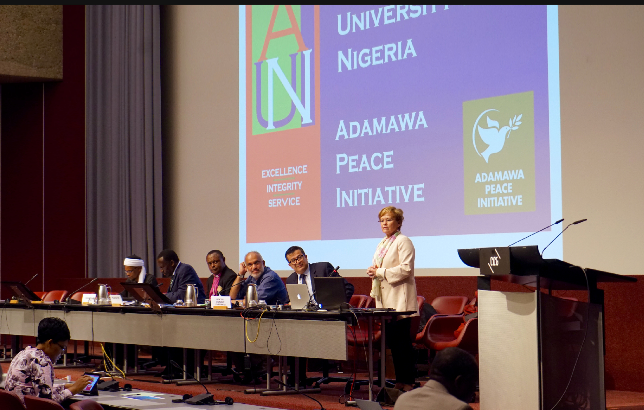 At a meeting of the United Nations High Commission for Refugees (UNHCR) session in Geneva on July 3, President of the American University of Nigeria, Margee Ensign, advocated collaboration between governments with international NGOs and local organizations to address humanitarian crises.

At this year’s meeting, the UNHCR brought together refugees and 500 local, national, and international NGOs, including the Adamawa Peace Initiative (API), to find long-term solutions to global humanitarian crises.

Delivering a report on the success of the AUN-API model,  Dr. Ensign, who chairs the Adamawa group, argued that local organizations not only have a greater understanding of their culture, but they also have a better ability to gather information, and respond to rapidly changing conditions.

The AUN-API was represented at the meeting by Dr. Ensign, the Secretary of the Adamawa Muslim Council, Imam Dauda Bello, and President of the New Life Gospel Center, Jimeta, Bishop Stephen Ransom.

The AUN-API model, said its members, has been extremely successful and should be replicated.   In Yola there has been no evidence of youths joining Boko Haram.  In addition to its local peace education efforts, AUN-API has provided humanitarian assistance in the form of food, water, medicine, clothing, and other supplies to Internally Displaced Persons (IDPs) who sought refuge from Boko Haram violence.

“The international response to the growing number of IDPs has been slow and inadequate in addressing the situation at hand, never mind in guiding a long-term durable solution,” said Dr. Ensign.  Speaking of the situation in Adamawa State, she pointed out that, “The number of IDPs grew exponentially during the summer of 2014. It was not until December of 2014 that NGOs began to arrive – and by this time, AUN-API had been feeding nearly 300,000 IDPs for six months without any outside assistance.”

AUN and API, under the leadership of Dr. Ensign, have helped thousands of vulnerable Nigerian youth obtain an education, develop valuable life skills, and nurture the fortitude to resist recruitment by the Boko Haram, which has slain innocent children, women, and men and displaced more than 1.5 million who have fled their homes.

With strong extended family bonding in the local culture, most displaced people now live with relatives rather than in refugee camps. For example, an estimated 405,000 IDPs fled to Yola, yet only 15,000 sheltered in refugee camps. The international aid community, however, is generally ill-equipped to deal with refugees outside of camps or camp-like settings.

AUN-API, she told the UN group, which counts among its members prominent Muslims and Christians, traditional rulers, academic and business leaders, NGOs, and other members of the Yola community, has the capacity and nimbleness to address the challenges in real time, given adequate access to aid money, food, and other supplies.

“We know our community and we are in a unique position to bring diverse resources together to find and implement solutions to crises, prevent our youth from succumbing to the temptation to join extremist organizations, and bring stability to the region. Our collaborative model works, and we believe that governments, international NGOs, and other organizations working in regions of conflict should pre-identify local peace groups such as ours, and evaluate and use these local networks to implement assistance,” concluded Dr. Ensign.