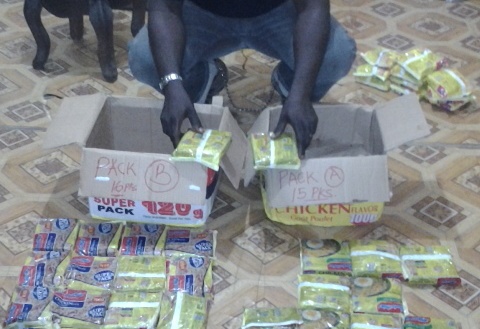 Two drug suspects, who attempted to escape after they were arraigned at the Federal High Court, Lagos, on Wednesday were recaptured minutes after they took to their heels.

Both suspects bolted from the court premises while Gila Moses, a chief narcotic agent at the National Drug Law Enforcement Agency, was signing their remand documents.

One of the suspects headed towards a street behind the high court building that ended in a cul de sac.

The second suspect was caught while he attempted to escape through the lagoon.

After the suspects were dragged back to the premises by court security guards who helped Mr. Moses in the recapture, the NDLEA officer, panting and cursing, shoved them into a Black Maria and locked the door.

The suspects said they became scared ‎after witnessing the judge sentence a convicted drug trafficker to 10 years in prison, according to the NDLEA.

In a statement on Thursday, the NDLEA commended the officers for their bravery and ingenuity in foiling the escape.

‎”The gallantry and courage of the officer who re-arrested and prevented an accused from escaping through the waterside is laudable,” said Ahmadu Giade, NDLEA’s chairman.

“I also thank the court security official who apprehended the second accused person.”

In a related development, the agency’s officials at the Murtala‎ Mohammed International Airport, Lagos, seized 8.09 kilogramme of dried weeds found to be cannabis, concealed inside packs of noodles and 1.06kg of a whitish substance that tested positive to methamphetamine hidden inside female hair attachment.

‎The noodles were headed for London while the hair attachments were meant for export to South Africa, according to the NDLEA.

According to Hamza Umar, the NDLEA commander at the Lagos Airport, the suspects include a refrigerator technician and a trader.

Quadri Aregbesola, a refrigerator technician, was caught with the dried cannabis while Emmanuel Nzubeka, a trader, was found with the metamphetamine.

“My profit in this consignment is just N6,000; I feel so sad that the consignment of foodstuff was given to me by a friend,” said Mr. Aregbesola, 47, who said he’s also into courier business.

“It was during search that hemp was found in some packs of the noodles. This is one of the hazards of the job.”

The suspect hails from Lagos State and is married with five children.

Mr. Nzubeka, a shoe seller at the Trade Fair Complex, told NDLEA investigators that the consignment of drugs was given to him by a friend in South Africa.

“My friend in South Africa sent N200,000 to me to buy female hair attachment and send to him,” said Mr. Nzubeka, who hails from Anambra State and married with a child. “He also asked me to send a package of attachment which he could not carry the last time he travelled due to excess luggage. Unfortunately, when I got to the airport, drug was found inside the other package of attachment which he asked me to add to the ones I bought.‎”

Mr. Giade expressed satisfaction with the seizures, describing it as an act of ingenuity on the part of the officers.

“These notable acts attest to the enthusiasm and commitment of officers in getting results even when the situation appears daunting,” Mr. Giade said. “The agency will continue to motivate officers by rewarding outstanding performance.”