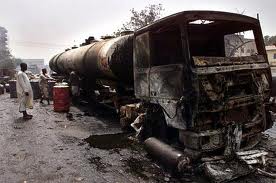 In view of the many tanker crashes that occurred across Nigeria in the past week, leading to the loss of lives and property, the Federal Road Safety Corp has summoned a national summit to forestall further crashes.

The FRSC said the summit slated for June 15 at the Musa Yar’Adua Centre Abuja will address the menace of articulated vehicles on the nation’s highways.

The corps’ spokesperson, Imoh Etuk, said the FRSC has concluded arrangement for the national summit for stakeholders in the haulage industry to help instil decorum in haulage operations in Nigeria.

Mr. Etuk said the corps marshal of the FRSC, Boboye Oyeyemi, said the agency was worried about articulated vehicle road crashes which accounts for 40 per cent of road traffic crashes in Nigeria.

“We have not relented in our efforts to reverse this unacceptable trend,” Mr. Oyeyemi said. “We have scaled up our engagement plans with stakeholders in the haulage industry and set out minimum safety standards for the conveyance of wet and dry cargoes to any part of the country, in line with the provisions of the National Road Traffic Regulations, 2012.”

The corps marshal said as lead agency in road traffic administration, the FRSC has conducted a study on the 44 tank farms and their various locations across Nigeria; with the hope of creating polices backed by stronger legal framework to checkmate excesses of the tanker drivers in addition to strategies for safer road use. This he said will form part of the national summit.

Mr. Oyeyemi also said part of on-going collaboration with the Petroleum Tanker Drivers branch of the National Union of Petroleum and Natural Gas Workers is to scale up public education for petrol tanker drivers against reckless driving and disregard for road traffic regulations, retraining of drivers, solicit government support on fleet renewals, alcohol and drug testing for all tanker drivers at the loading bay by officers of the FRSC and establishment of resting points for these checks.

The FRSC also resolved with NUPENG-PTD to enforce the inspection of all Trucks for speed limiters with effect from September 1, before loading petroleum products from any of the depots across Nigeria, in addition to ensuring road worthiness of vehicles (Trucks) under a safe- to- load programme in all depots.

5 things a woman should not do for love