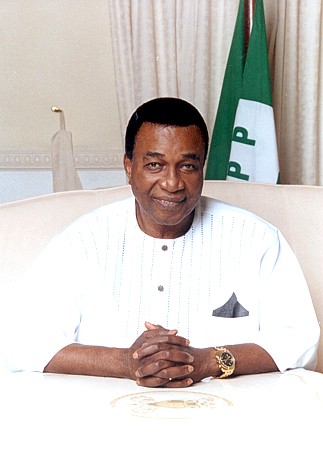 A former Governor of old Anambra State, Jim Nwobodo, has criticized the judgment of a Federal Capital Territory High Court in Abuja, which ordered him to vacate his rented apartment in the Maitama district of Abuja.

The former governor vowed to challenge the judgment, saying the court erred in law.

Speaking at a press briefing in Abuja on Sunday, counsel to Nwobodo, Amobi Nzelu, said his clent has resided in the property, located at 24 Ona Crescent, Plot 768 Cadastral Zone A5, Maitama Abuja, for a long time.

He wondered why the respondent decided to release the judgment to the press after two months but did not inform the media that he (Nwobodo) has appealed.

The respondent, Adin Miles International Limited, was said to have sometime in 2008 bought the property from one Al-Mustapha Abubakar, who initially leased the property to Mr. Nwobodo.

Mr. Nzelu said, “It is not about non-payment of rent as was wrongly reported in the media. My client was ready to pay rent. He was negotiating for an outright sale. The man that bought this property is a fellow Igbo man and knew that my client was occupying this house and that he was his former governor.

“Despite knowing these facts, he still went behind and bought the property, and then told his lawyer not to disclose his identify to my client. That was what happened. A Yoruba man will not do this to his brother, an Hausa man won’t do this to his brother. My client had an agreement with the person that sold the house. We do not have any business with the new buyer. I have raised the issue in court, but the Judge closed his eyes on these issues.”

In an appeal with suit No. FCT/HC/CV/80/2011 and filed at the Abuja Division of the Court of Appeal by his counsel (Nzelu), the ex-governor asked the appellate court to set aside the judgment of the lower court delivered on March 25 2015 by Justice Suleiman Belgore, in favour of the respondent.

He said, “The learned trial Judge erred in law when he failed to appreciate the fact that for title to vest in any person who purchase a property in Abuja, the consent of the Hon. Minister of the FCT, Abuja must be sought and obtained and this failure occasioned miscarriage of justice.

“The learned trial Judge erred in law when he entered judgment in favour of the respondent without seeing any deed of sale nor deed of assignment nor power of attorney and this occasioned miscarriage of justice.”

According to Mr. Nzelu, the Judge also erred when he assumed jurisdiction to hear and determine the case “in the absence of valid documents”.

Mr. Nzelu said, “We have been in possession of this property for a long time and the owner made an offer to sell it. He now went behind and picked up this property. My client went and discussed with this man. He even added N30 million to what the man originally paid to acquire it. When we took over this property, it was in a bad shape.

“We now went to court and the judgement was to come up in January this year, but it was deferred till March 25 because of the judiciary workers’ strike. The man that went is not the original owner of this property. There was no breach of agreement between my client and him and they are not my client’s landlord. There is no deed of sale on this property before they went to court. There is no agreement between my client and the man that went to court.”

According to the lawyer, six days after the judgment, specifically on March 31, he appealed against it adding that the respondent was served the processes and motion for stay of execution, to which his counsel responded.