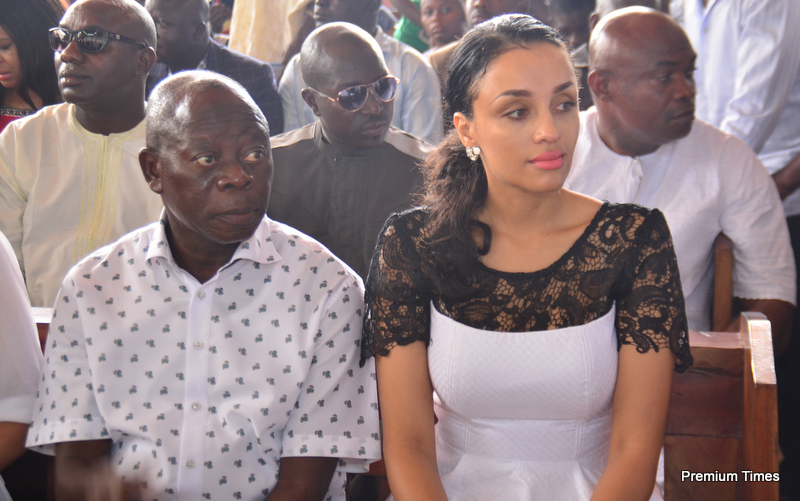 Edo State Governor, Comrade Adams Oshiomhole and his wife, Iara, at a Thanksgiving Mass held at the Immaculate Conception Cathedral, Auchi, on Sunday, to thank God for the success of their wedding ceremony.

My wife is model in my heart – Oshiomhole

The Edo State Governor, Adams Oshiomhole, has described his new wife, Iara, as a model in his heart even as he said his new wife is not a replacement for his late wife, Clara, whom he said is irreplaceable.

Speaking at a Thanksgiving Mass held at the Immaculate Conception Cathedral, Auchi, on Sunday, Mr. Oshiomhole debunked reports that his wife is a ‘top model’ saying the speculation might have been generated from her poise and beauty.

He said, “When I read newspaper stories and they say that Comrade has married a ‘top model’ I’m like maybe it’s another person.

“The lady that God has directed to my path and heart to marry is not and was not a model. Of course, she looks beautiful and I understand that is why people assume that this kind of a lady must be a model but of course, she is a model in my heart and we hope and pray that we will be models in the heart of our God and I think that is the most important thing”.

Governor Oshiomhole appealed to the congregation to keep supporting him and his new wife in prayer saying “I ask you to please continue to pray for us. It is not easy. I lost my first wife and it is not possible to replace her. Yes, I have married another but it is not a replacement. You cannot replace a wife especially one you married when you were young and you were anonymous. Nobody knew you from anywhere, you had nothing, no car, no house; now, that you can never replace. But I understand that under the Catholic doctrine I am entitled to have another wife which is what I am trying to do.

“Thank you for your prayers, support and blessings that you have always showered on me and the one you conveyed this morning on me and my new wife and we ask for more and more prayers that this marriage will be my last and that God will help us, to unite us and bond us together with the blood of Jesus”, he prayed.

In a homily entitled, “Communicate the truth in Christ”, the Parish Priest of the Immaculate Concpetion Cathedral, Auchi, Valentine Anavbeokhai, urged Christians to eschew misrepresenting or twisting the truth in their daily communication saying we all have a duty and obligation to speak the truth, live the truth and if the need arises, to die for the truth.

He also used the opportunity to congratulate the governor and his new wife on their marriage and prayed for God’s peace and blessing on them.

The Thanksgiving mass was attended by the governor’s children, Steve, Jane and Adams (Jnr), the parents of his wife, Mr and Mrs Jesus Fortes, government functionaries, and well wishers.

Tales of murder, assault at Rivers Commission of Inquiry

Patience Jonathan opens up: How I had surgery during campaign, moved out of Aso Rock