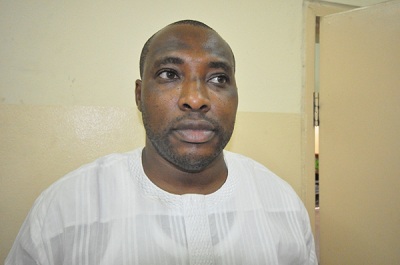 The Economic and Financial Crimes Commission on Wednesday arraigned the Kwara State Commissioner for Information, Olatunji Moronfoye, and Ope Saraki, the Special Adviser on Millennium Development Goals to Governor Abdulfatah Ahmed, before Justice A.O Faji of the Federal High Court, Ilorin, for offences bordering on abuse of office, awarding contracts to cronies, diversion of public funds and money laundering.

Mr. Moronfoye was docked on a three-count charge while Mr. Saraki, who was arraigned alongside his companies: Cogent Integrated Service Nigeria Limited and Ladida Support Service Limited were arraigned separately on a five-count charge.

Mr. Moronfoye, while a Special Adviser to former Governor Bukola Saraki allegedly used his position to enrich himself.

The EFCC alleged that he awarded contracts to the tune of over N200m (two hundred million naira) for the renovation of Ijagbo Primary Health Centre and Specialist Hospitals within the State, to a company in which he has interest and was sole signatory to its account.

Mr. Saraki similarly abused his office and laundered state funds for his personal benefit by awarding inflated contracts to companies owned by his cronies.

In one of the transactions involving the purchase of Ambulance Buses for hospitals in the state, the EFCC said Mr. Saraki duped the people of Kwara State by procuring thirteen Hiace buses from a “Local Car Dealer” and converting them to ambulance in place of factory-built ambulance for which a contract of N171,990,000.00 (one hundred and seventy one million, nine hundred and ninety thousand naira) was awarded to Chemiroy Nigeria Limited.

One of the counts read:

“That you, Ope Saraki being the Special Adviser on Millennium Development Goals (MDG) to Governor of Kwara State sometime in 2012 at Ilorin within the jurisdiction of this Honourable Court did by undue interest conducted procurement fraud in the procurement of 13 Units of Ambulance for 13 General/Specialist Hospitals in Kwara State at the sum of N171,990, 000.00 (One Hundred and Seventy One Million, Nine Hundred and Ninety Thousand Naira only) a contract awarded to Chemiroy Nigeria Limited and thereby committed an offence contrary to Section 58 (4) (b) of the Public procurement Act, 2007 and punishable under Section 58 (5) of the same Act”.

The accused persons pleaded not guilty to the charges when they were read to them.

Upon their pleas, the counsel to the EFCC, Joseph Uzor, urged the court to fix a date for trial to commence.

But the defence, represented by J.O Olatoke, SAN, told the court that, he had a pending application for the bail of the accused persons.

Moving the application, Mr. Olatoke, argued that bail is a constitutional right of the accused noting that the accused had been on administrative bail of the Commission since 2013 and had not breached the bail condition.

Mr. Olatoke further told the court that the accused, Mr. Moronfoye, is suffering from a peculiar ailment that warrant him using respirator consistently to sustain his life.

According to him, the prison service does not have the medical facility to treat and maintain the peculiar health condition of the accused.

“Having not abused the administrative bail granted him (Moronfoye) by the prosecution, we urge your Lordship to admit him to bail while assuring you that he will always be available to stand his trial”, Mr. Olatoke pleaded.

However, Mr. Uzor countered, saying “the accused could be evasive if admitted to bail”.

Mr. Uzor argued that the Nigeria Prisons Service had well organized medical facilities in its locations across the country with equipments and competent manpower to attend to any ailment. He urged the court to exercise its discretion judicially and judiciously.

After listening to the submissions of both counsel, Justice Faji admitted the accused to bail in the sum of N50m (fifty million naira) and two sureties in like sum. The sureties must produce “Certificate of Occupancy” of landed property within urban area of Ilorin and must swear to affidavit of means.

The sureties must also produce evidence of tax payment for three years. The accused must be reporting to the EFCC head office every three weeks and must also notify EFCC whenever he intends to travel outside the country.

Eventually, when Mr. Saraki’s case was called, since the case is similar to that of Mr. Moronfoye, both parties conceded that the court has a discretionary power to grant bail.

In the circumstance, Justice Faji adopted his earlier ruling on the bail application granted Mr. Moronfoye. The difference in the two rulings is that while Mr. Moronfoye retains custody of his Passport, Mr. Saraki would have his deposited with the court.

The case has been adjourned to September 22 and October 20 respectively for hearing.

In a related development, one Kayode Adeniji, together with his companies, Kabriel Global Concept Limited and Mide Landmark Ventures Limited, were also arraigned today before Justice Yusuf Halilu of the High Court of the Federal Capital Territory sitting in Jabi, Abuja on a five- count charge bordering on criminal breach of trust, cheating and fraudulent conversion of property.

The accused are being prosecuted for allegedly defrauding the complainant, Christiana Adetola Makanjuola, owner of a parcel of land situated at Plot 19, Gwarimpa 1, Cadastral Zone CO2, Abuja, to the tune of  N235 million( Two Hundred and Thirty-Five Million Naira).

Both Adeniji and Makanjuola had initially signed a Memorandum of Understanding, MoU, for the development of the property, but the former defaulted,   thereby making it impossible for the parties to draw up a proper property agreement.

One of the counts reads:

“That you Kayode Gabriel Adeniji; Kabriel Global Concept Limited and Mide Landmark Ventures Limited on or about January 2013 within the jurisdiction of this Honourable Court did conspire among yourselves to dishonestly convert to your own use proceeds from the sale of fractions of plot number 19 Gwarimpa 1, Cadastral Zone C02, Abuja belonging to Mrs. Christiana Adetola Makanjuola, thereby committed and offence contrary to section 96 of the Penal Code and punishable under Section 97 of the same Code.”
The accused person pleaded not guilty to all the charges when they were read to him.

Justice Halilu, however, ordered that the accused be remanded in Kuje Prison pending the determination of the bail application and adjourned the matter to June 8 for commencement of trial.