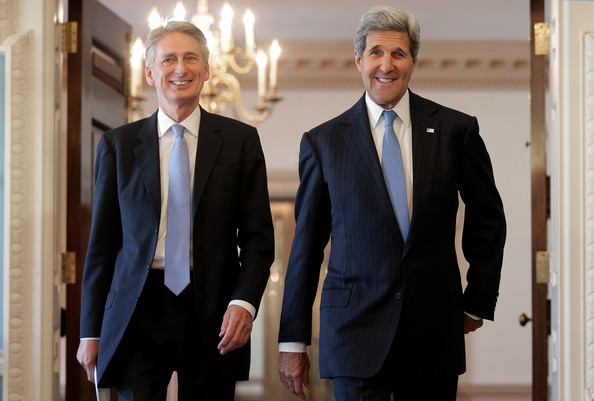 The United States Secretary of State, John Kerry, and the United Kingdom Foreign Secretary, Philip Hammond, on Tuesday reiterated the message of peace and crisis-free elections beginning next Saturday, saying global spotlight was on Nigeria.

The two envoys said the expectation of Nigeria’s friends around the globe was that the election would be peaceful, transparent and fair.

Whether the victor in the election would be the incumbent President, Goodluck Jonathan, or opposition candidate, Muhammadu Buhari, Messrs. Kerry and Hammond said the decision was entirely for Nigerians to make, while all parties have an obligation to respect the outcome.

“There are good reasons why the international spotlight is firmly fixed on Nigeria during this critical period and why we have come together to support an open and credible electoral process,” the two leaders said.

“Nigeria is Africa’s largest democracy and what happens there will have an impact well beyond its borders. A successful election, free from violence and with wide participation, accurate vote counting, and responsible leadership from the candidates would inspire the region and spur future progress and prosperity.”

According to the envoys, successful polls would also be a historic show of support by Nigerians for democratic values and an equally firm rejection of the brutal terrorist group, Boko Haram, and others who advocate or perpetrate violence.

“As friends and democratic partners of Nigeria, we urge that the voting for president and parliament go forward as scheduled on March 28; there should be no further delay of this crucial vote,” they admonished.

They expressed happiness that Nigerians from across all political divides recognize the need to inaugurate a new president by May 29, adding that the U.S. and U.K. governments shared in Nigerians’ concerns about violence, both related to elections and more generally.

“In 2011, more than 800 people died in post-election clashes, and a recent survey shows that half of Nigerians are concerned about political intimidation this time around,” they said.

“The good news is that President Jonathan and General Buhari have repeatedly and publicly stressed their commitment to non-violence before, during, and after Election Day.

“Both candidates have affirmed their intent to act solely through legal channels in pursuing any concerns that might arise regarding the fairness of the vote.

“It is imperative that they—and their backers—live up to this pledge. Elections should be decided at the ballot box and, if necessary, in the courts; not through efforts to coerce others.

“Respect for the constitutional process and the independence of Nigeria’s Independent National Election Commission, INEC, is the right approach, and the only one that offers a sustainable way to address Nigeria’s many challenges.

“The countries we represent, the United States and the United Kingdom, strongly support the pledges articulated by the Nigerian candidates.

“The elections must be decided in accordance with the rule of law. It follows that any person who incites violence at any stage in the electoral process, or who seeks power through unconstitutional means, should be held accountable and should understand that the consequences will be severe, both domestically and internationally.

“After an election, it is natural to focus attention on the winner, but in any democracy, the unsuccessful candidates also have critical roles to play.

“No one expects any political leader to retreat from firmly-held policy positions or beliefs, but a losing candidate owes it to his or her country to acknowledge defeat as soon as the popular verdict is clear, to urge supporters to accept the outcome, and to advocate unity in the face of national threats. That is the kind of leadership Nigeria needs.

“A free, fair, and peaceful presidential election does not guarantee a successful democracy, but it is nevertheless an essential ingredient—especially now in Nigeria.

“This is a country rich in resources and blessed by a creative and dynamic population. Its leaders can be extremely effective as evidenced by their swift action to prevent Ebola from establishing a foothold in their nation—thus saving thousands of lives.

“Overall economic growth rates are healthy and parts of the country are doing well. And yet, Nigeria has been held back by local tensions, a wide disparity between rich and poor, the lack of an adequate safety net for the disadvantaged, shortages of electricity, a rigid bureaucracy, and widespread corruption.

“These challenges have made the country vulnerable to internal conflict including the kidnappings, murders, and other atrocities perpetrated by Boko Haram.

“Nigeria’s next government will need the support of all its citizens to address these challenges, and its unity will make it easier, on the security side, for regional neighbors and the larger international community to provide necessary help.

“We urge all eligible Nigerians to vote, to resist those who attempt to incite violence, and to come together as one country to defend against terrorist threats and to build the shared prosperity and enduring freedom all Nigerian citizens deserve.”