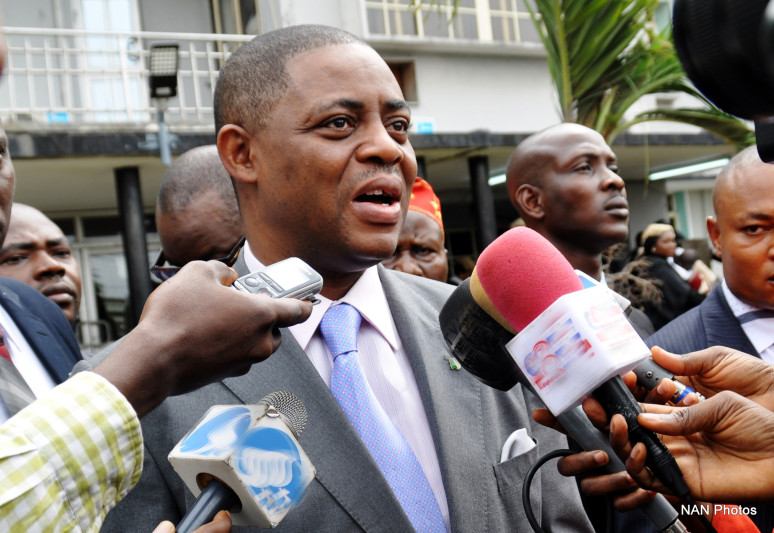 The Director of Media and Publicity of the Peoples Democratic Party Presidential Campaign Organisation, Femi Fani-Kayode, has accused the opposition All Progressives Congress of “coming up with a different lie every day of the week”.

Mr. Fani-Kayode, who reacted to the APC’s allegation that the Federal Government and the PDP were planning to render the card readers ineffective on Election Day, said the allegation was wild and baseless.

The spokesperson of the APC, Lai Mohammed, had Monday issued a statement saying the Goodluck Jonathan Administration and the PDP was plotting to render card readers ineffective on Election Day, with a view to justifying their fears about the use of the device and ultimately to scuttle the polls.

Reacting, Mr. Fani-Kayode said the Federal Government and the PDP did not have any plans to sabotage the card readers and did not need to indulge in such “shady, sinister and tardy practices”.

“We view this wild and baseless allegation with amusement,” Mr. Fani-Kayode. “Frankly the APC deserves to be pitied. So desperate are they for power that their latest strategy is to come up with a different lie for every day of the week.

“They have lost control of their senses; their imagination has gone wild and they see things that are simply not there.

“This latest allegation is absurd; it is not rooted in truth; it is irrational and it is illogical. It is clear that the opposition are already preparing the grounds and making excuses for their own defeat.

“They are running scared and they are already preparing the minds of their supporters for their imminent failure at the polls.

“Instead of saying something tangible and attempting to ginger up and encourage their supporters, all they indulge in is giving them a daily dose of sub-standard fairy tales and dirty lies. They should stop all this nonsense and desist from making these wild and baseless allegations.

“President Goodluck Jonathan and the PDP do not have any plans to sabotage the card readers and neither do we need to indulge in such shady, sinister and tardy practices.

“We look forward to the elections which will commence in two weeks time and we have no doubt that the overwhelming number of the Nigerian people will vote for our candidates and support our party.”