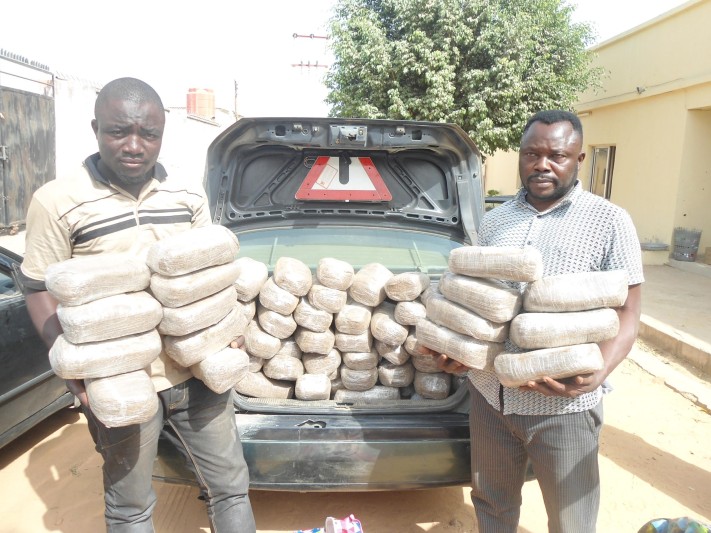 “We responded swiftly to an intelligence report on the duo and when we got to their location at Emir Road, they were found to be in possession of compressed cannabis with a total weight of 66kg,” Ahmadu Garba, the NDLEA Kano Commander said in a statement Thursday.

“They have claimed ownership of the drugs stating that it was a joint business. They both contributed the start-up capital with which they invested in cannabis smuggling.”

According to its preliminary investigation, the NDLEA said both suspects had been convicted in the past for drug-related offences.

In 1982, Mr. Martins, who hails from Aguata local government in Anambra State, travelled to Lagos in search of greener pastures; he was arrested at the Lagos airport in 2005 by NDLEA officials on his way to Spain, according to the anti-narcotics agency.

“NDLEA charged him to court for attempting to export one kilogramme of cocaine to Spain. He was found guilty and sentenced to two and half years imprisonment but he mischievously evaded jail term,” the agency stated.

“Three months after his criminal jail evasion, he was apprehended at the Kano airport with 4kg of cocaine. This second arrest made the NDLEA to uncover the jail evasion cartel in 2007. Ejike was sentenced to five years jail term for smuggling 4kg of Cocaine found on him at the Kano Airport. The charge number is FHC/IL/CR/183/2007, FGN VS Ejike Martins.”

On completion of his five years jail term, Mr. Martins was re-arrested by NDLEA officials at the gate of the Kano Prison and taken to Lagos to complete his initial jail term.

“After completing the arrears of his sentence, he regained his freedom in January 2014. Still not remorseful, Ejike went back to drug trafficking. This time around, he connived with one ThankGod Obums to smuggle cannabis from Edo State to Kano. He is currently being investigated in Kano,” the agency said.

For Mr. Obums, an indigene of Delta State who dropped out from Delta State University in 2003, he was first arrested for dealing in cannabis in Kano.

“He was convicted but after spending three months in prison custody, he regained his freedom after the wife paid the fine of N350,000.”

In his reaction, Ahmadu Giade, the Chief Executive of the NDLEA, said no drug trafficker would go unpunished in the country.

“The case history of Ejike Martins is a reflection of the rising capacity of the NDLEA as a strong institution,” he said.

“The data management system in the agency has significantly improved. Our transition from a short term to a long term undercover operations is yielding very positive results. The foundation for effective policing is strongly established and I can reassure Nigerians that no drug dealer shall go unpunished in the country.

“Unless drug traffickers quit the criminal act, we shall continue to bring them to book.”

The agency said that the suspects would soon be charged to court.