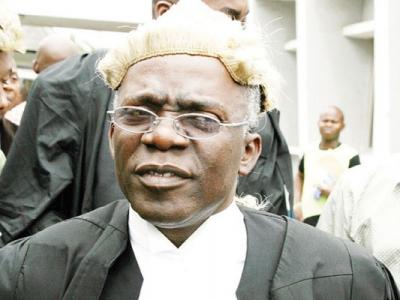 Senior lawyer, Femi Falana, has expressed worries that the general elections rescheduled to March 28 and April 11 may not take place.

At a press conference organized by the Nigerians United for Democracy in Lagos, Sunday, Mr. Falana said that the Service Chiefs should give a public undertaking that the election would no longer be shifted.

“According to the INEC chairman, Professor Jega, only the service chiefs could guarantee that the rescheduled elections would hold,” said Mr. Falana, a Senior Advocate of Nigeria.

“That was the submission of the INEC boss when he appeared at the Senate last week. For reasons best known to them, the security chiefs have not assured the nation that security would be provided on the new election dates.

“We are compelled to call on the National Assembly to extract a firm undertaking from the NSA and the security chiefs that the General Elections would not be further postponed or disrupted.

“The undertaking ought to be made publicly by the security chiefs in view of the categorical pronouncement of the Court of Appeal that the armed forces have no role to play in the electoral process.”

Mr. Falana also called on the Service Chiefs to obey the recent verdict of the Court of Appeal that soldiers’ deployment for election duties is illegal.

“Since all authorities and persons are bound to obey the verdicts of our courts, the President and the security chiefs should demonstrate their commitment to kowtow to the rule of law by withdrawing soldiers from election duties,” he said.

“We need to prevent a slide into anarchy; we need to take our destiny in our hands; we need to ensure that darkness does not once again descend on our country.

“We are insisting that nothing must change the new dates of March 28 and April 11. Elections must be allowed to hold on these dates. Nigeria is on the march again, this time, no one will be able to halt the decisive will of the people for democracy and sustainable livelihood.”

While announcing the postponement of the elections last month, Attahiru Jega, the Chairman of the Independent National Electoral Commission, INEC, blamed it on the Service Chiefs for failing to guarantee the security of its staff if the polls went ahead.

But Mr. Falana said that President Goodluck Jonathan’s government was the brain behind the polls shift, noting that the decision is illegal.

“Following the refusal of the Council of State to support the postponement, the National Security Adviser to the President and the security chiefs wrote to the INEC to the effect that they could not provide security for the election, as the armed forces would be involved in a military operation in the north east region. As the operation would last for six weeks the INEC was compelled to shift the election to March 28 and April 11, 2015.

“As far as we are concerned, the postponement of the elections at the instance of service chiefs cannot be justified in law. It was a plot to undermine the democratic process and prevent Nigerians from exercising their right of franchise.

“Having fought the war on terror for six years, there is no indication that the Boko Haram sect would be wiped out in six weeks. Since the operation is limited to 14 local governments there was no basis for not holding election in the remaining 760 local government areas in the federation and the 6 area councils in the federal capital territory.”

Mr. Falana further warned those nursing the idea of an interim government or a coup de tat to “perish the idea,” noting that Nigeria had had enough dictatorial regimes.

“In rejecting the manipulation of the political transition we organized a rally on February 14, to condemn the conspiracy of the ruling clique against Nigerians,” Mr. Falana said.

“Another rally is scheduled to hold on February 28, 2015 where Nigerians will stand hand-in-hand to speak with one voice against electoral terrorism, against any further poll shift, against any attempt to introduce an Interim Government, against any military incursion into politics, against corruption, against the devaluation of the national currency.

“We call on Nigerians to come out in large numbers to assert themselves and take control of their destiny.”