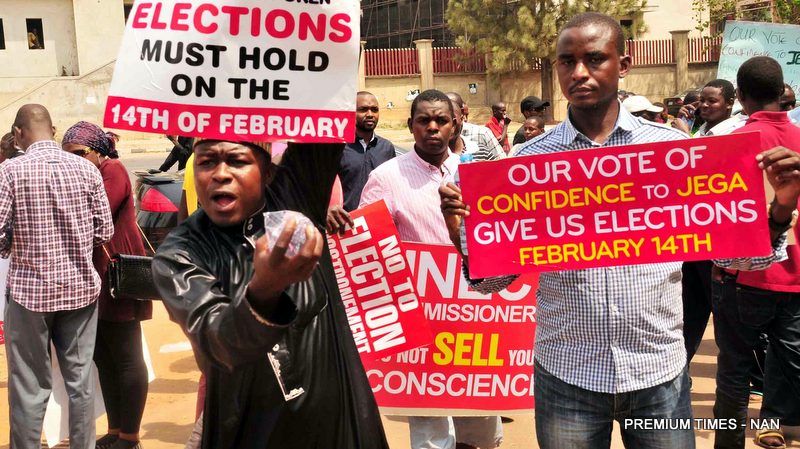 Some residents of Abuja on Saturday again protested the possibility of postponing the already scheduled general elections.

At the Unity Fountain, near the Transcorp Hilton Hotel, where protesters gathered, an armoured police vehicle and other utility vehicles were seen parked with police officers scattered around the area.

The protesters were however blocked by police officers as they marched towards the headquarters of the Independent National Electoral Commission.

A lady who simply identified herself as Sadatu said it was very wrong and unfair for anyone to consider postponing the elections.

“How can anybody think of this? That’s not fair, INEC had four whole years to prepare for this election. If we could have an election in 2011 when much was not in place, why not now?” she asked.

Another protester said the credibility of INEC was at stake with the rumoured postponement. He added that Nigeria’s democracy was threatened with by the call for election postponement at this time.

The protesters, with the intention of marching on the presidential villa, had gathered at the same venue on Friday marching towards the Eagle Square where they were blocked by security operatives.

The protest was organised by the civic group, National Consensus Movement.

The National Council of State had met on Friday and agreed that the elections should go on as planned.

Attahiru Jega, Chairman, INEC, has said the commission is prepared for the elections and has no plans for a postponement.

However, the commission has been holding consultative meetings all day to possibly review the scheduled dates for election.

Before Friday’s anti-postponement protest, some allegedly hired youths numbering about 100, had on Monday marched on INEC headquarters demanding the postponement of the elections.

The youth had gathered in front of the electoral body’s headquarters, asking the commission to delay the polls because of the difficulty in the distribution of the Permanent Voters Card, PVCs.

The youth carried banners and placards with the inscriptions such as “Election is for general participation, not for selective few”, “INEC, do the right thing”, “Don’t disenfranchise Nigerians”, and “We demand for the extension of election to allow Nigerian exercise their franchise.”

After the protest, the youth returned to the Unity Fountain where they were sighted sharing money.

It was not clear if they were sponsored by the Presidency or the PDP, but sources indicated that they were hired by some unnamed individuals who promised them money.

The protest confirmed PREMIUM TIMES exclusive story of last Thursday revealing the plot by the Presidency and the ruling Peoples Democratic Party to organize a nationwide protest against the electoral body to force it to shift the polls.

The National Security Adviser, Sambo Dasuki, a retired colonel, recently at an event in London, made a case for a shift of the elections to give INEC more time to distribute all the PVCs.

However, criticisms trailed the call with Nigeria’s leading opposition party, the All Progressives Congress alleging that Mr. Dasuki was only making the call to buy time for President Goodluck Jonathan’s campaign to gather steam.